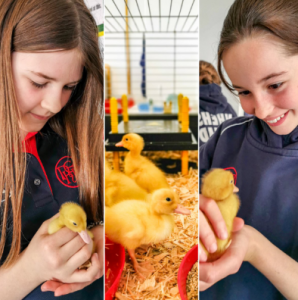 There had been posters advertising for duckling mummies dotted around the school, which caused much excitement after last year’s chicks. The prospective duckling reps (Mummies) sent their application emails to Ms Brown setting out why they would love the job, and after a short wait, the lucky few were chosen.

Then, after much anticipation, the eggs arrived and within four days B3 became home to four adorable ducklings; Archie, Frankie (Frankenstein), Shelly (Mary Shelly) and Derek. The names were chosen with care by the Year 7 duckling Mummies and Year 8 Grand-Mummies, and the ducklings began to devolve personalities and traits that helped tell them apart. But it wasn’t all quacks and snuggles! Being a duckling mummy comes with a lot of responsibility as ducklings require plenty of care and attention.

Girls were allowed to come and visit the ducklings in their years’ allocated lunch time, and the duckling Mummies were in charge of maintaining a calm and quiet environment. It was a hard job; only two or three girls could visit at a time and the Mummies had to judge when the ducklings were tired out. So, we were divided into door, hand washing and handling stations that changed each day, which proved an efficient way of keeping both visitors and ducklings happy.

The duckling Mummies also got the opportunity to teach a duckling-themed lesson to a group of Year 5s and Year 7s. The lesson consisted of a PowerPoint with loads of cool and cute duckling facts, a Kahoot quiz and a few competitive colouring activities. The PowerPoint included information about the cruelty-free no-kill farm the ducklings came from, how to tell the ducklings apart and little known facts about ducks in general. For example, ducks actually see in ultraviolet radiation, and see reds, blues and greens differently to us. And did you know ducks live on every continent except Antarctica?

This lesson helped the duckling Mummies develop their presentation, problem solving (and improvisation!) skills through talking about ducklings. It also built up enough confidence for several of them to face the 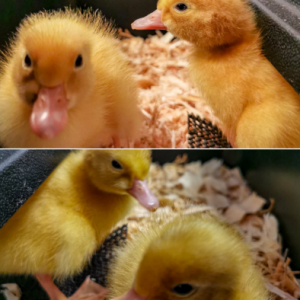 school in a duckling assembly led by the Year 7 Mummies later in the term.

The ducklings visiting NHEHS was a heart-warming experience, the ducklings being adorable and great fun. Not only did it make for an amazing lesson for the Mummies in caring for animals and but it also led to the discovery of many amazing facts, and sharing our new found knowledge helped build confidence. We found the ducklings also helped many girls relax before exam week.

It was a great experience all round, and although we were very sad to see the ducklings go, we are excited for next year! The farm the ducklings came from also owns many types of game, and NHEHS might be welcoming some partridges! Each year is different, and everyone is really excited to see what next year holds.