Our sixth form Music students, went to the Festival Hall to hear Berlioz’s Symphonie Fantastique, one of the study pieces for for the A Level examination.  Sitting in the choir stalls proved exciting with the whole stage reverberating to the sound of the 150 piece orchestra, full percussion section, 4 harps and 8 desks of strings.

The evening also featured a piece for pedal piano by Gounod. An interesting contraption, the pedal piano incorporates two pianos on top of each other, the lower played by the feet of the performer. 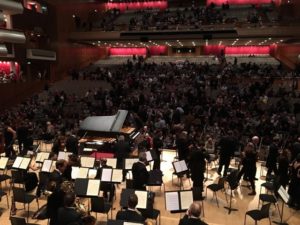 The U18 Hockey Team competed in the  U18 Middlesex Hockey Tournament facing teams from Latymer Upper, Godolphin and Latymer, St Benedict’s and Mill Hill.  With some superb leadership from  Nathalie W and Philippa J and a fantastic team effort, the girls won the whole tournament and were  crowned U18 Middlesex Hockey Champions.  Now we look forward to following their progress and cheering them on in the Regional Hockey Finals in November! 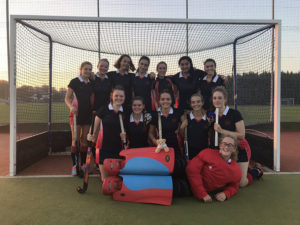 World Culture Week kicked off with an “olé” and went on to feature African dance, a treasure hunt which involved hunting for clues in different languages and ended with a multilingual Poetry Slam.

Immersing our girls in the languages they are learning through a series of exciting and fun cultural experiences, was very much the focus last week. As Simon, our Head of Languages puts it, “having a Global perspective is very much in our DNA”.

What better way then to understand Lorca’s “La Casa de Bernada Alba” which our A-level girls are studying, than a Flamenco workshop? That’s exactly what our Year 13 girls suggested would bring the text to life so, a focus on Flamenco, literally kicked-off the lively week long cultural programme. Girls from Year 7 and above, were shown how to tackle this complicated dance by a professional dancer, with instructions delivered in Spanish.

French culture was delivered on a plate with a lunchtime session making crêpes and raclette which attracted long queues. Extending the French theme, the music and languages department hosted an evening of French music which closed with a powerful performance by the Lower School Choir of the theme song from a classic of French cinema: `Les Choristes’.

The Atrium came to life again on Thursday this time with the sounds of Africa. Blindfolded initially, girls and their teachers, listened and danced freely to the mixture of lively East African and Angolan rhythms before following a  dance choreographed and led by Spanish teacher, Boris.  Meanwhile those not tempted by the beat took part in a world literature themed Treasure Hunt  with the three winners all coming from Year 8.

Poetry rounded off the week. With an exciting twist for World Poetry Day, all girls put their linguistic skills to creative use in a competition to craft multilingual poems on the overall theme of change. The three finalists had the chance to  deliver their poems in Spanish, Mandarin and French in assembly and visiting poet, Frances Leviston, inspired our girls with the theme of metamorphosis and gave a series of workshops throughout the day.

A Poetry Slam brought crowds to the Atrium at lunchtime and provided a rousing finale to a week of cultural and linguistic endeavour !

Year 12 and 13 French students led us through the evening which showcased solo, ensemble and choir performances including the first performance by the newly formed Year 10 piano trio and there was also wine, cheese and a French quiz.

The NHEHS Cross Country team of 30 girls all ran extremely well in the Ealing Schools Cross Country Championships.  For the Seniors we took the gold in the Year 9/10 race and got a full house in the Year 11/12 race clinching gold, silver and bronze and also took fifth place too.  All of these girls qualify for the Ealing London Youth Games team!  Some other stand out performances came in the Year 7/8 race where it was particularly nice to see girls new to NHEHS finishing so well up in the rankings.  Our Junior runners also had a good day with a gold in the Year 6 race and a silver in the Year 5.  Results are sent out in a couple of days and we hope we’ve held on to our borough title for another year!

Singers from Blossom Street, a highly versatile and vibrant chamber choir comprising some of the UK’s best young singers and which performs regularly on TV and radio as well as on the concert platform,  joined the NHEHS massed choirs for a day-long workshop followed by an evening concert.

80 students from Years 7 to 13 in Chamber Choir, Senior Choir, Harmony Choir and Lower School Chamber Choir took part in an inspirational day of singing, learning and fun. The professional singers from Blossom Street produce an amazing sound and wowed our girls with their technique, knowledge and energy.

In the evening the NHEHS choirs performed a range of contemporary, classical and folk songs ranging from ‘The Water of Tyne’ to ‘Stay with me’ rounding off their performance with a rendition of ‘Rolling in the Deep’ by the combined choirs.

The Atrium and Hall were buzzing on Saturday as over 250 NHEHS alumnae greeted former classmates and teachers at this year’s OGA tea. There were tables piled high with scones, chocolate eclairs, sandwiches and sausage rolls  while a glass of Prosecco on arrival soothed any  fears as to whether everyone would recognise old friends.

There were speeches by the OGA Chair, Jane Sigaloff, who described the evolving role of the OGA Committee and thanked  two Committee members who retired this year: Jane Hering and Gillian Lowe, for their long service. Headmaster, Matthew Shoults, spoke of his delight at meeting so many of the school’s alumnae in the last year, and highlighted the great input Old Girls can have into current school life. He also talked with pride about how the NHEHS Old Girls’ network is regarded throughout the GDST as one of the very best.

The speeches were followed by tours of the school buildings, old and new, led by sixth formers and the afternoon wound up with the annual OG vs NHEHS U18 netball match (The U18s won 20 -10 and there is now considerable talk about ‘a proper training regime.’ )

Many congratulations to Year 11 on a truly excellent set of GCSE results, the best ever for the school.

We are most proud of the time, effort and energy the girls, with the support of their teachers, have put into achieving these excellent results. We wish to congratulate each and every one of our girls on their superb achievements; they should be very proud of themselves.

Many congratulations to the 2018 Leavers for their excellent A Level results.

This is testament to the girls’ enthusiasm and perseverance, and the support and dedication of their teachers. At a time of uncertainty in the media about new A Level qualifications, we are very pleased that the girls have taken this in their stride

They now head off to a wide range of courses and universities, whether Medicine at Cambridge, Classics at Oxford, Natural Sciences at Durham, or Music Production at the British and Irish Modern Music Institute. It has been such a pleasure seeing every girl finding the right path for them and doing so well.