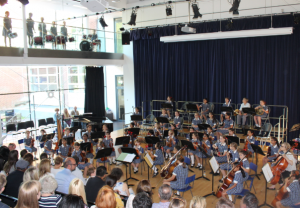 The Year 6 Percussion Group got the Summer Concert on July 2nd off to a flying start with their “Notting Hill Stomp.” Making their debut, the group of 12 was newly formed this year but enchanted the audience with a dramatic performance, with musicians positioned all around the Main Hall, before gathering to play together on the upper walkway.

The pinnacle of the music calendar at Junior School, the Summer Concert gave the musicians the opportunity to demonstrate all their hard work in the practice room, early morning sessions and lunchtime ensembles.

The percussionists were followed by the Junior Super Strings, comprising mainly girls from Years 4 & 5, but also some Year 3s who were playing in front of a sizeable audience for the first time. The Super Strings lived up to their name & played their trio of pieces (Bow Rock, Back Scratcher & Return to Earth) with great aplomb.

The Flute Ensemble played a very calming Bach’s “Sheep May Safely Graze” followed by the dramatic “Music for the Royal Fireworks.”

Our three cellists or “Celli Beans” played Purcell’s “Trumpet Voluntary” and Lafferty’s “Seek Ye First The Kingdom of God” beautifully, before the Year 6 Quartet took the stage for a faultless performance of the Rondo in C by Mozart. 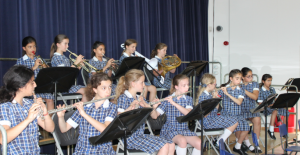 Since the introduction of brass instruments into the Junior School last year, the Wind Band (primarily flute & clarinet) has been boosted by girls playing the trombone, the French Horn & the trumpet. We thoroughly enjoyed the full range of instruments in “Yesterday” by Lennon/McCartney.

The Junior School Orchestra with 38 musicians then played two contrasting pieces, firstly “Papageno’s Song” by Mozart followed by the upbeat “Can Can,” which built up to a fantastic finish. 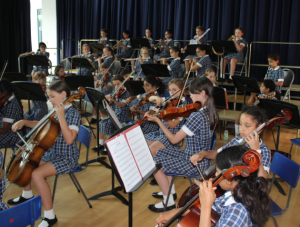 Making their first appearance at a school concert were the Junior School Singers, a group of Year 5 & 6 girls which was only formed last September. They performed Lin Marsh’s “Believe” followed by “Tears in Heaven” by Eric Clapton.

The final performance was by the Chamber Choir who reprised the three pieces they had sung so beautifully at the Final of the GDST Junior Choir of the Year in March, where they only narrowly missed top spot.

From the wonderful harmonies of “For the Beauty of the Earth” to the lively “Sit Down, You’re Rocking the Boat” and “The Lullaby of Broadway” with added choreography, the choir had the audience clapping & tapping their feet all the way.

The finale was the Duetto Buffo di Due Gatti (the comic duet of two cats) performed by the Chamber Choir who sang with huge smiles on their faces as they sang “Miau!” over and over!