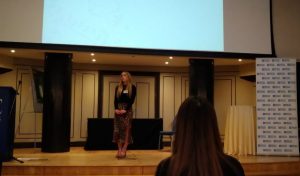 On 29th December, a team of NHEHS girls participated in the British Council Mandarin speaking competition.

Alice competed in the individual advanced category and spoke about the One Child policy.

Nanki, Nina , Evangeline, Harneet and Lara competed in the group category. They performed an original drama based on the 1842 Nanking Treaty in Hong Kong.

All girls performed excellently and spoke Chinese eloquently on stage. Many congratulations!