“Change Starts With Us” – Anjali’s Story

“Change Starts With Us” – Anjali’s Story 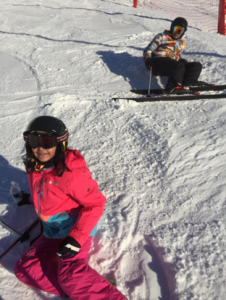 Our Year 8 Lower School Leaders addressed the theme “Change starts with us” in assembly last week as part of this year’s Anti-Bullying Week. They spoke on overcoming major periods of change in their lives  and the influence of inspirational women in the public eye who have shared their own personal stories.

“Hi, I’m Anjali and my big change was when I was seven years old, when I broke my leg in a skiing accident. I had a cast for three to four months then repeatedly tried to get back on my feet by going to our local indoor ski area. I fully started to ski three years later when I was ten years old. This was a big change as most of my family thought I wouldn’t go back to skiing again after my injury, but I proved them all wrong, and now I am on my bronze star.

If you were wondering how I broke my leg, it’s a funny story. It was the last run on the last day and I was about two minutes away from the bottom where we were to go on a gondola and go home. I skied into a sort of ditch and my leg did a full 180 degree turn. I was in that position crying and screaming until a kind woman helped me up and waited with me for my ski instructor.

Chloe Kim is a 19 year old American snowboarder, and a four-time X Games gold medalist and the first woman to win two gold medals in snowboarding at the Winter Youth Olympic Games. She is the current World, Olympic, Youth Olympic, and X Games champion in the halfpipe, and the first to win the title at all three major events. She fractured her ankle and had to have surgery and was back up again a few months later. A big inspiration!”