“Change Starts With Us” – Avi’s Story

“Change Starts With Us” – Avi’s Story

“Change starts with us” is the theme for this year’s Anti-Bullying Week, so last Thursday our Year 8 Lower School Leaders were invited to speak at assembly and share how they have overcome obstacles following major change in their lives. Our leaders also highlighted the importance of support around them, as well as the inspiration from women in the public eye who have shared their own personal stories.

“Hi, I’m Avi and ​I will be talking about the biggest change in my life so far and how it is similar to a change to Audrey Hepburn.

When I was ​born​ I used to live in Hampshire (which is basically a ​large areas of green countryside full of sheep, cows and churches!) I lived there with my ​big ​extended Indian family so, my grandparents and my uncle and  two aunties. ​Since my parents worked in Central London, I was raised by my grandparents, who spoke to me in Punjabi.

Then at the age of seven I moved into an apartment in zone two in London in Maida Vale. This was a big change in my life as I was used to a really big family ​with lots of people around but when we moved to London, it was just my nuclear family (my Mum and my Dad). What I also had to get used to was the fact that London was much noisier and​ busier and any time of day and there are people roaming in the streets​ till the early hours of the morning. There were no more sheep and cows to be seen anywhere. My parents moved so I could have more opportunities to experience things and a better education. They were also closer to work ​so they could get home quicker and spend time with me. ​So this was the biggest change in lifestyle so far. 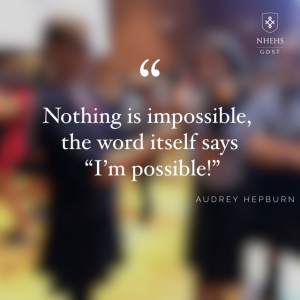 Audrey Hepburn was born in Brussels and started dance classes. She got some small roles in various films. Audrey wanted to boost herself and her career and by doing this she moved to London​ so she could also get lots of opportunities. There, in 1951​ she acted in the production Gigi. This was where her acting was well recognised. She was offered many jobs and roles. Her mum always supported her and gave her a head start as she become an actress.

After she moved she said ‘Nothing is impossible, the word itself says ‘I’m possible’!”