“Change Starts With Us” – Evie’s Story

“Change Starts With Us” – Evie’s Story

Last Thursday’s assembly was led by our Year 8 Lower School Leaders who all spoke on the theme of “change starts with us” – highlighting how they have overcome obstacles following major change in their lives and how they have all been supported by those around them to come back stronger. All linked their own personal stories to inspiring women in the public eye who we can also learn from.

“I’m Evie and I’m going to be talking about Emily Blunt and how she became successful through change and how that relates to me. You might know her from voicing Miss Piggy from the Muppets or Mary Poppins in the new film. ~But during the time when she was aged between 7-14 Emily had a major problem. She could barely carry out a conversation with her classmates.

That all changed, however, when one of her teachers encouraged her to try out for the school play—a totally unappealing suggestion given the fact that she had such a hard time communicating. The teacher observed that whenever she did voices and impressions the stutter disappeared. So the teacher kept gently pressing and suggested she try more accents and character voices to help get all the words out—and it worked. By the end of her teens, she had overcome her stutter and she realised how much she loved theatre, landing her with big roles on stage and on the big stage. Emily said in an interview, “I was a smart kid, and had a lot to say, but I just couldn’t say it. It would just haunt me. I never thought I’d be able to sit and talk to someone like I’m talking to you right now. 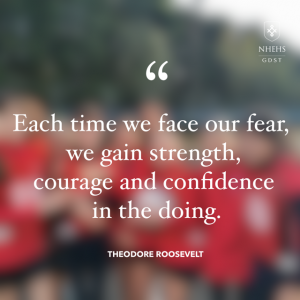 It made me think back to our school play in Year 5  in Junior School when many of us stepped out of our comfort zones with the teachers alongside us, to support us. The teachers really helped to boost our confidence when speaking to large amounts of people and most of all to have fun while doing it. Overall it was the confidence we gained that helped us the most.

I found this quote by Theodore Roosevelt that sums up it: “Each time we face our fears, we gain strength, courage and confidence in the doing.”