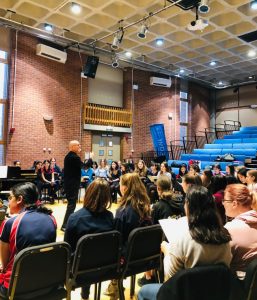 On Tuesday 10th December, we were lucky enough to welcome composer Bob Chilcott into our school for the day. Throughout the course of the day he gave workshops to the Senior choir and the Lower school choirs as well as working with the A level students on their compositions. The workshops with the choirs were invaluable, helping both choirs to improve the pieces that they were working on, some of which were Mr Chilcott’s own compositions. This enabled us to get a real insight into how best to perform the music, as we were able to understand how Mr Chilcott had envisaged the pieces when he composed them.

As an A level student, I felt privileged to have such an esteemed composer working with me on my composition. Bob Chilcott has worked around the globe and his pieces are well known repertoire for many musicians. Some of his works are regularly played on the radio and his time spent as a professional singer also contributes to what makes him such a well-respected musician. It was amazing to have a professional’s input on my composition and I will endeavour to make use of the advice he gave to me wherever I can.

To be able to experience the work of a musician such as Bob Chilcott firsthand was an amazing opportunity and I think all the students who were able to work with him found him to be a huge inspiration.

A huge thank you from the Music Department to Imogen for organising such a fantastic day!