Dance Leaders Boosts Confidence All Round!

Dance Leaders Boosts Confidence All Round! 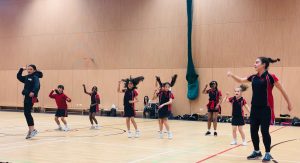 Following the NHEHS Year 5 High 5 Netball Tournament organised by the Year 10 Sports Leaders at the end of  the spring term, it was time for the Year 10 Dance Leaders to take the stage (although not literally!) for the NHEHS Day of Dance. Pupils from Year 5 and 6 from Radnor House, Twickenham and North Ealing Primary School were invited to join the NHEHS Juniors for a Day of Dance on May 2nd.

As part of the NHEHS Leadership Programme for Year 10, girls take up either Sports Leaders or Dance Leaders positions as they work towards a Level 1 qualification. The Day of Dance formed a key part of their assessment.

There were two sessions, one before lunch and one after lunch. In the first session, the Year 10s led the juniors with games and helping them learn the importance of warm-ups before doing exercise. In the second session, the Dance Leaders taught groups of X children dance routines. 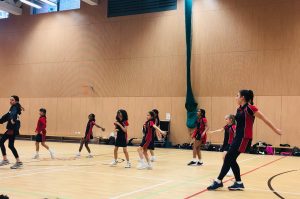 What was the trickiest thing about the day?

We faced a few challenges during the sessions, including ending up with extra time left over at the end, which we had not expected, so we had to use our ingenuity to make something up on the spot for the Year 6 pupils to do! Some of the younger pupils got a bit hungry too just before lunchtime so we had to do our best to help them focus on the task in hand!

What was the best thing about the day?

Probably spending time with the Year 6s – we loved their enthusiasm for dance and learning. They were very enthusiastic and excited to learn new things, so they all listened really well. It was great when some of the younger ones wanted to show their individual dance skills as part of the group routine too. Some of the younger children were so confident and happy at performing their dance routines in the afternoon session that they didn’t need the Dance Leaders to stand in front to do the routine with them! 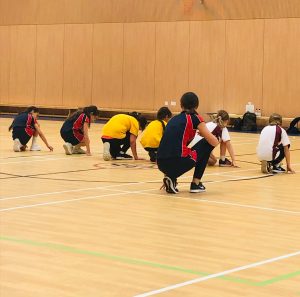 What did you learn from the day?

To be prepared for anything and to be flexible, you never know what’s going to happen!

Finally, what does being a Year 10 Dance Leader involve? What does it mean to you?

We have been in the process of gaining the Dance Leaders qualification throughout the whole of Year 10. As well as leading Year 6s in the Day of Dance, each of us had to lead two 15 minute sessions to the whole of our Year 10 class as part of a normal dance lesson, where we had to do a warm-up and teach a routine that we made up ourselves.

I would have never had the confidence to lead my class before I took part in the Dance Leaders programme, so I felt very proud of myself after doing it!