Daria from year 7 has been inspired to create the first ever NHEHS Swimathon to raise money for the charities Cancer Research and Glass Door. 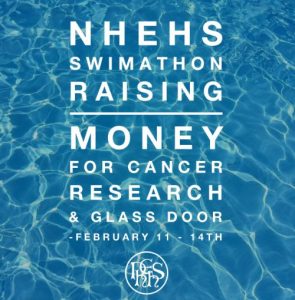 Motivated to mastermind her Swimathon by the charitable efforts of the teachers, Daria was particularly impressed by the efforts of Mr Shoults and various other teachers, who ran in the Ealing Half Marathon for a local charity, the Log Cabin last term.

Daria and her friends enjoy swimming, so she was surprised that there was not already a swimming event like this and saw it as an opportunity to raise money for charity, while enjoying a bit of competitive swimming between friends!

Daria decided to support the charity Cancer Research as she knows people with cancer and understands the importance of having medical, emotional and financial support when struggling with the disease. She also chose to support the charity Glass Door, which helps feed, clothe and shelter homeless people, as she was surprised that so little money could do so much. As little as 50p could give a hungry person a bowl of porridge for breakfast.

We hope that everyone will support Daria in making her charity event a big success!

Top tips for taking part in the Swimathon: