NHEHS was extremely proud to welcome Helen Sharman, CMG, OBE, who in 1991 became the first British astronaut when she launched on a Soyuz spacecraft and also became the first woman to visit the Mir Space Station.

The entire Senior School were joined by Junior School girls from Year 5, who have been working on a project about Helen, as she captivated us with a wonderful presentation on her life and career, from university, her work in the confectionery industry, her astronaut training in the former Soviet Union, right through to her time on the space station.

Weaving biology, chemistry, physics and psychology through her talk, she also showed us  imagery, provided by NASA and Helen herself, which covered all aspects of her space experience, from launch to washroom facilities, eliciting  wows through to giggles from her audience. Helen then fielded a huge range of questions and only the need to return to Earth and our classes stopped us from spending the rest of the morning finding more to ask.

Finishing off on a selfie-stick moment with the whole school, Helen left us all cheering! 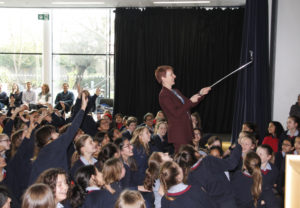 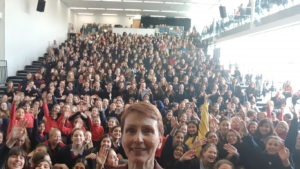