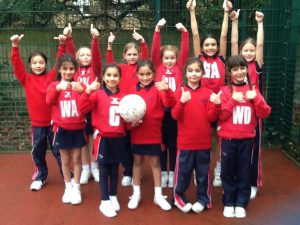 On Tuesday 6th March an excited but somewhat nervous team of NHEHS U9 netball girls travelled to Paddington Recreation Ground to take part in the first U9 Pembridge Hall Netball Tournament. The sky was looking rather grey but all were keeping their fingers crossed that the weather would hold out until the end of the tournament.

NHEHS were in a section with Pembridge Hall, Garden House, Bute House, Glendower and Falkner House and had five matches which were each seven minutes long. This was 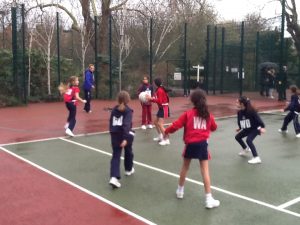 the first experience of competitive netball against other teams that NHEHS had played and it was very much a baptism of fire especially when their first match was against Bute House! NHEHS were not deterred by their 4-0 loss and showed tremendous resilience, steadily improving with each match, narrowly losing three matches and drawing one.

The heavens had now opened up and despite the miserable conditions and no shelter, NHEHS were up for the new round of matches. First up was a Barbarians Team which NHEHS beat comfortably 3 – 0, followed by the last match of the tournament against Pembridge Hall. Our U9 team were determined to continue their winning streak and it showed when they won 2-1. Each girl had improved so much by the end of the tournament and thoroughly enjoyed the experience.