From the Parthenon to Po-Mo – Da Vinci Programme

From the Parthenon to Po-Mo – Da Vinci Programme 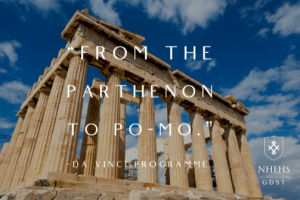 On Wednesday 19th June, the penultimate Da Vinci club took place after school. There were two sessions which we could go to and the session I went to was called ‘Parthenon to Po-Mo’ where we discussed how aspects of architecture in Ancient Greece and Rome can also be used in Postmodern architecture.

When we entered, we were each asked to draw a Greek temple in a minute. My drawing skills are very limited but, in the end,  I managed to draw a triangle on-top of a few columns with stairs (we learnt the technical terms for these later) like many of the others in the room.

Then we began to learn about the features of temples. Firstly, we learnt about the different types of columns: Doric, Ionic and Corinthian. They each have different styles and represent different things.  Then we learnt that the triangle on top of the Greek temple is called the pediment, the stairs at the bottom of the temple is called the stylobate and about dentils (closely spaced, rectangular blocks). We noted these things before looking at postmodern architecture.

Our final task was to draw a postmodern building for a ‘multi-purpose arts centre’. There were so many great ideas like having paintbrushes instead of columns!

All in all, it was a great session and I definitely learnt a lot from it! Whenever I go around London now, I will definitely take note of all of the columns and architectural styles.