Full of Fun at the Fair

Full of Fun at the Fair

The School Hall was bursting with excitement today as the Extra-curricular Clubs Fair got underway. Subject reps across the sixth form were on a serious recruiting mission for a vast array of before-school, lunchtime and after-school clubs.

With a choice of over 60 Clubs covering topics as far reaching as Feminism, Robotics, Philosophy and Coding as well as a huge choice of sport, drama and music, the girls used their creative efforts to promote their passions. A group of drummers lured crowds towards the music department, a team of MI5 special agents promoted the Code Breakers club while a sausage-and-dog combo wondered round advertising the Backstage Pass Club (the Theatre Tech Club). Clever robots were on display to promote the Vex and Lego Robotics Clubs and amazing masks and sculptures were used to encourage sign-ups for the ever popular Art Club. 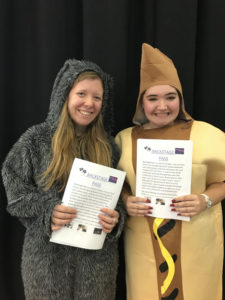 Teachers were on hand to help with newer clubs such as “Sapere Aude” and “The Only Way is Ethics”, new philosophy clubs this term which aim to challenge with questions such as “why is it ok to eat animals but not humans”, while the Feminism and Politics Clubs is aiming to bring big issues of the day to life through exciting and thought provoking debate. Cloud 9 Weather, another relatively new club makes use of the School’s very own and unique weather station on the roof to give girls the chance to explore forecasting.

And with a full and extensive gamut of sporting and music clubs also on offer, girls throughout the senior school were spoiled for choice. Sign-ups were impressive and enthusiastically received. The buzz undisputed.