Following a bake-off at school earlier this term our two star bakers Imogen and Li An headed off to Portsmouth High School to represent NHEHS in the semi-final of this year’s GDST Bake Off competition. 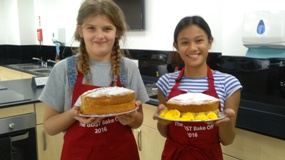 Based on the popular a BBC television show, semi-finalists were set the task of baking a special version of a lemon Victoria sandwich with lemon curd filling. Fittingly, the unique recipe they followed was specially created by GDST and Royal High School alumna, Mary Berry for the Trust’s 140th anniversary celebrations in 2012.

As  in the TV show, the girls also had to take part in a technical challenge, bringing with them a design/style sheet illustrating how they would bake and decorate cupcakes in honour of a favourite heroine, real or fictional, contemporary or historic, if they succeeded in getting through to the finals.

The competition was stiff and the standard of baking amazingly high with the judges, Portsmouth’s Lord Mayor and Lady Mayoress, having a difficult job in choosing those who would go through to the final. Our congratulations go to the winners from Oxford High, Portsmouth High and Royal High School Bath and well done to Imogen and Li An who as you can see had a great day and rose wonderfully to the challenge.