‘Languages to the Rescue’ was the theme of the annual GDST Languages Festival hosted by NHEHS last week with over 100 linguists and teachers participating from fellow GDST schools Brighton & Hove High, Putney High School and Sutton High School. 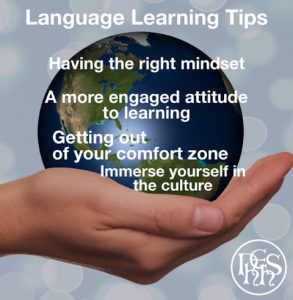 Mr Piesse and the MFL Languages department had lined up a busy day of fun activities highlighting the importance of languages in today’s world.

Kicking off the morning was an inspiring talk from Wimbledon High Alumna Amy Harland from the Foreign and Commonwealth Office, who explained how language learning had helped in her diplomatic career.

First up for Years 8 and 9 was the “Learn/Teach a Language” challenge. 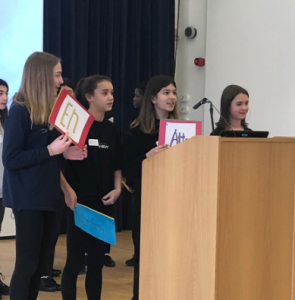 Linguists from each school adopted teaching roles and were judged on how interesting they made the lesson, their use of resources, teamwork and memorability! The real challenge was that each school had to teach a brand new language and to deliver the lesson without using any technology! NHEHS took on Swedish, Putney Dutch, Brighton Farsi and Sutton Arabic.

In the meantime, Year 7s from all four schools demonstrated very impressive levels of concentration and focus at the Spelling Bee, as they had to translate and spell in French, German, Spanish and Mandarin under timed conditions.

After break, we enjoyed the much anticipated Eurovision Sing Off in the Recital Hall as the multi-talented Year 7 and 8 linguists performed singing and dance routines in the four languages before the judges. After the judges’ deliberation, Brighton were judged the winners with their medley of French pop songs which had the whole audience clapping along in time!

At the same time in the Main Hall, the Year 9s were also performing – using their dramatic and creative skills – they were challenged to perform four minute original plays using at least two languages. There were some excellent performances from Language Super Heroines as well as a great use of props too! The NHEHS Year 9 Mandarin group were declared the winners for their play about being lost in the centre of London. 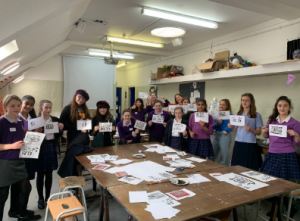 After lunch, some of the younger girls learned the intricacies of Chinese brush painting from Mrs Luo, while others took part in a Poetry Writing workshop.

NHEHS Alumna Anna Allatt (Duty Editor, BBC3) led a Career workshop for the Year 10 and 12 students together with Mrs Eberlin (Acting Head of German at NHEHS).

At the final session, all the linguists came back together to find out how the Year 10 and 12s had taken up the challenge set by our Year 12 Language Reps: “Create news stories videos on Ipads showing how languages can come to the rescue in an apocalypse!”

Having spent their morning honing their videography skills, the girls demonstrated great GDST spirit by working together to produce an amazing variety of dramatic news stories, (using at least two foreign languages) which they filmed all over the Senior School.

At the Prize Giving the audience were treated to the winning performances from the NHEHS Year 9 Mandarin Play and the Eurovision winners, Brighton, while certificates were awarded to the winners of all the other activities.

Many thanks to Mr. Piesse and the NHEHS MFL department for all their hard work putting together such varied and fun activities to inspire our language learning! 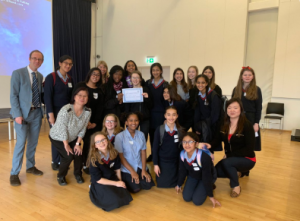