Congratulations to Imogen from Year 13 – the first NHEHS girl to achieve her Duke of Edinburgh Gold Award this academic year!

Imogen started the challenge in September 2017, having already completed Silver & Bronze alongside girls from NHEHS. This time, however, she was doing her DofE outside of school with a group of people she had never met before.

There are 5 parts to the Gold DofE award; the Expedition (including a practice and a real one of 3 nights and 4 days of walking), the Residential (a 5 day and 4night experience), the Physical, the Skills and the Volunteering.

To complete the Physical and Skills part of the Award, Imogen practised hard on her tennis and flute over the 12-month period. Some of the NHEHS girls may recognise her as a familiar face from Imogen’s year spent volunteering at the school’s swimming pool alongside Mr Bent to meet the Gold Award Voluntary requirement. This followed Imogen’s year as a volunteer for Oxfam for her Silver Award. For the Residential part of the Gold Award, Imogen took part in a 5-day conservation and outdoor activity residential at Sayers Croft in Surrey.

The most challenging part of the Award by far was the expedition where participants had to walk as a group for 18 km per day for 4 days, then camp for 3 nights. 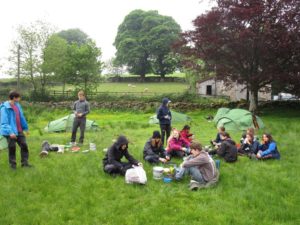 Imogen took part in a practice expedition in May as part of a group of 17, where they camped for 3 nights and 3 days on Dartmoor. Despite good weather, the route was tough and the expedition physically demanding, as the group had to rely on their own map reading and carry all their equipment with them, including tents, clothes, food & cooking equipment.

Returning to Dartmoor for the real expedition itself in the summer, however, circumstances were quite different. Alongside the expedition, Imogen had to work with a group of people she had never met before, putting together a project on exploring the myths and history of Dartmoor. This in itself caused its own challenges with a lack of phone connectivity/3G or Wifi with the group having to rely on old fashioned methods of research (aka calling their parents) to complete the project!

This time, the challenge of the expedition itself was far more of a mental one, with Imogen just one of a group of four taking part in the challenge and faced with atrocious weather.

With fewer people and constant rain, there was a totally different dynamic as the group had to pull together as a team to keep each other motivated to the end. One of the lowest points was when Imogen fell into a river midway through the day but had to continue to their destination to keep on track. Despite being drenched, the team then had to pitch their tent on rain-sodden ground and got even wetter as the water flooded the tent at night. Team spirit and hot food got them through it however and they completed their challenge. 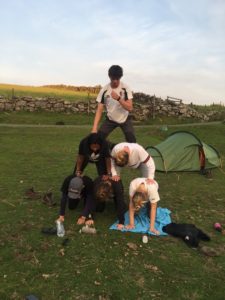 What did Imogen learn about herself over the year?

“I can get myself motivated. I’ve learned that a lot of how you deal with a challenge is mentality. Motivation, helping others and teamwork were so important to finishing all the challenges.”

Would she do it again?

“Yes! If there were a Platinum Challenge, I’d be up for that!”