Half Term History Trip to Berlin

Half Term History Trip to Berlin 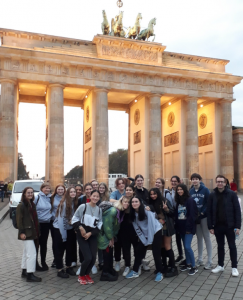 On Monday the 21st October 2019, 18 year ten and eleven history students travelled to Berlin. After an early start, we arrived at the hotel an hour early giving us two extra hours to explore Berlin before the walking tour at 3 pm. We all really enjoyed the tour allowing us to see so much of Berlin on the first day, including part of the Berlin Wall, the Reichstag and my personal favourite, the Brandenburg Gate! After a long day, we were all glad to have dinner and an early night.

The next day we went to the German Resistance Memorial where we were especially inspired by the younger members of the resistance movement against Hitler despite the danger. We later went back to the

Berlin Wall Memorial where we could look over the wall at all of the obstacles citizens of the East would have had to tackle to escape to the West. Later that day we also visited the Palace of Tears, which despite many of us thinking that it would be an old palace, turned out to be a crossing point between East and West Berlin whilst the wall was up! It was extremely interesting to find out that retired people from East Berlin could travel to West Berlin freely but were the most likely to smuggle restricted items such as music and some food back into the East. We all had a really fun evening, going bowling that night, and one of the students even beat a teacher!

Wednesday was a very thought provoking day, when we went to the Sachsenhausen (concentration camp) Memorial and heard about the awful punishments that these mostly innocent people were subjected to and how no-one helped them. We later visited the Museum of the Allies where we learnt about the attempts of each country’s secret service to get information from the other. In the evening we went to the Reichstag, which had a great view of the rest of the city that was all lit up in the dark. 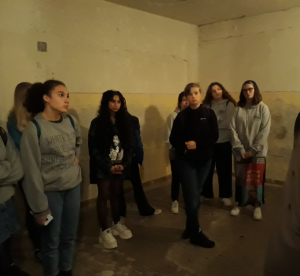 On our fourth day in Berlin, we visited the Memorial to the Murdered Jews of Europe and the Memorial to Sinti and Roma Victims of National Socialism, which made us appreciate how much Germany has acknowledged its past. In the afternoon we jumped forward to the 1950s, visiting the Stasi Museum which was located in their old headquarters. They had left many of the rooms as they were, which allowed us to vividly picture how it would have been. Later that afternoon we went to a Stasi Prison and were shocked to hear about how cruel the punishments were and how all inmates, even those who were just aged fourteen: all shared the same horrible conditions, despite many only having been imprisoned for political crimes, such as expressing a negative opinion of the state in the presence of an informant. Although the conditions later improved in some ways, the prison was still being used as recently as 1989, only 30 years ago!

Our last day in Berlin was packed full of things to do! First, we saw the city from a completely new perspective, from the TV Tower, which made us appreciate how big the city really was and how much 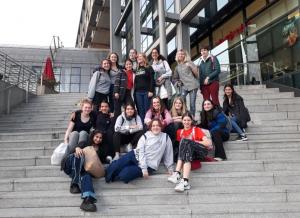 history there was concentrated in it. After that, we visited the German Historical Museum and the Topography of Terror, which consolidated our understanding of the city’s uses in the last century. We had a very eventful final evening, however, with our flight being cancelled at 10.20pm, but we all made the best of it and enjoyed the extra morning the next day.

The trip was so much fun and a really interesting week, so we would all really recommend it to anyone in younger years who is going to do history or German GCSE because it really improves your knowledge of the period and also your understanding of German culture whilst giving you a chance to practise your language skills!