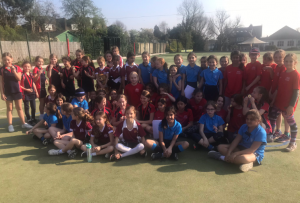 As part of the NHEHS Leadership Programme for Year 10, girls take up either Sports Leaders or Dance Leaders positions as they work towards a Level 1 qualification.

The highlight is undoubtedly the annual NHEHS Year 5 High 5 Netball Tournament, which is organised and run by the Year 10 Sports Leaders in March. The 2019 tournament took place just before the end of the spring term, with Year 5 teams from Radnor House, Little Ealing, St Augustine’s and NHEHS Juniors.

We asked Sports Leaders Mia and Sophie about their roles on the day and how it all went:

How did you organise the tournament?

Each school sent an A and B team and three NHEHS Year 10 Sports Leaders were assigned to each team of five – nine girls to manage and lead during their three matches. Sophie looked after the NHEHS A team.

Which roles did the leaders take? 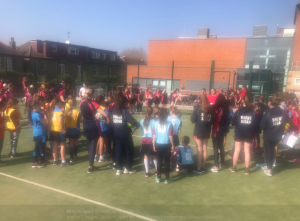 There were plenty of things that needed to be done for the tournament to run smoothly! Roles included umpiring, timekeeping, coaching, rotating the girls so they played all the netball positions, making sure they completed the shooting challenge and generally looking after the team so that they had an enjoyable time at the tournament.

What was the hardest thing to manage at the tournament?

The High 5 rules mean that the players have to rotate positions – so it was tricky making sure this happened, particularly as some girls didn’t want to change positions. We wanted to make it fun and fair for all the girls so that no-one missed out.

What was the best thing about the afternoon?

We really enjoyed watching the girls playing netball, learning to play together as teams and adapting to their new positions. It was sweet when they celebrated scoring a goal together!  We think that the best way for children to enjoy and play sports is to start from an early age with a variety of sports as we did ourselves, so it was great to see the girls loving playing team sport like this together. The weather was amazing too! 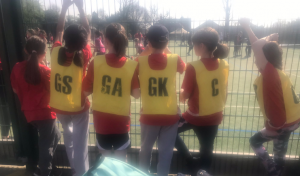 What did you learn from the tournament?

Umpiring the matches themselves was a great experience as we had not done that much of that before. As team leaders we soon grasped the importance of having a balance of being both authoritative and encouraging when speaking to the girls and trying to get them to co-operate and play netball together.  We also learned that it was vital to deliver instructions quickly and clearly as the Year 5s’ attention spans were not that long!

What does being a Year 10 Sports Leader involve? What does it mean to you?

As a Sports Leader you are learning how to deliver sporting activities to younger children in a safe and fun way. As part of the course, we have to plan a sports session and present it to the rest of our year 10 class, so each week one girl teaches her lesson to the class.

We both chose football for our sports but you can choose any sport or just general games. Our lesson plans included a warm up, skills/drills, how to put the skills into practice in a game and a cool down. The hardest thing about doing this was definitely gauging the ability levels of your Year 10 classmates and how much you could teach in a lesson! We over estimated both!

Another great learning was to be as organised as you can be, but also be flexible in your approach to teaching and have a back- up plan if things go wrong or not quite as you had hoped; ideally turning it into a positive situation. By doing all this we definitely appreciated far more how a PE lesson is structured – the reason for us doing something specifically in a lesson, plus the benefits of learning a new skill and how it can fit into your sport.

We would both highly recommend being a Sports Leader to the Year 9s next year!