Howzat? NHEHS are Middlesex U12 Cricket Champions at Lord’s!

Howzat? NHEHS are Middlesex U12 Cricket Champions at Lord’s! 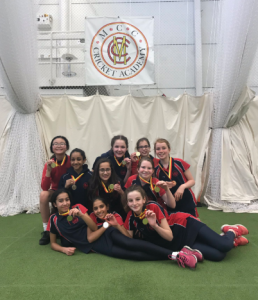 Last week, the NHEHS U12 cricket team travelled to Lord’s, the home of cricket for the Lady Taverners Indoor Middlesex Tournament. Some of the team members had been part of the victorious Year 6 team which had won the U11 tournament at the same venue last year, so were looking to repeat their 2018 success.

In the first game, our girls played Francis Holland, narrowly winning by 2 runs, with one wicket taken: run out by Kikuko!

Next, we played St Paul’s Girls’ A team and unfortunately lost due to 30 runs being deducted for wickets.

The third game was versus Lady Margaret’s A team and our girls played brilliantly, taking 84 runs against their seven! Particularly good performances came from Kikuko who bowled one out and Mimi, Yasmin and Annabel who all took a catch.

The fourth game was another amazing win for our girls, as we took four wickets from the Godolphin B team. Mimi, Anya, Annabel and Eliza all took a wicket each. It was an exciting game as Godolphin batted very well, making us neck and neck – if it weren’t for the wickets. 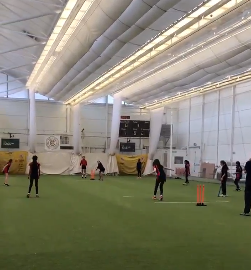 So we made it through to the semi-final and won the toss for the first time all day; meaning were in the field for the first innings for once. We played St Paul’s again, very narrowly beating them by four runs, with Eliza winning it for us with a fantastic catch.

So in the final, we played the team to beat, a real challenge; Godolphin A team. They batted well, but we really stepped up in the field and worked with the pressure, taking six wickets, from Anya, Eliza, Annabel and Kikuko. In the second innings they had us on the run, taking three wickets quite early but we brought it back in the bat and beat them by 10 runs.

Overall, we bowled extraordinarily well across the whole team. Opening batters Anna and Evie really got us off to a good start throughout the day and amazing team work was present from everyone. Super coach Claudia, who has done a brilliant job coaching the team during the winter, and Miss Nicholas kept up the team’s energy levels from the sidelines throughout the tournament.

A great day for our girls meant we won gold! Good work everyone!