On Friday 21st June, Year 10 students from across the GDST gathered at Chelsea Football Stadium for the annual Inspiring Females Summit, held in London for the first time since it was founded by Norwich High School in 2016.

Once we were all seated in the Great Hall of the stadium, the day kicked off with a warm up game in which beach balls were passed between tables and we had to write answers to questions such as ‘who is the most inspiring sportswoman to you?’ on each coloured section of the ball. This was followed by a keynote speech by Tram Anh Nguyen. Tram Anh is the co-founder of the Centre of Finance, Technology and Entrepreneurship (CFTE), a Fintech Education facility which encourages learning about artificial intelligence and other elements of technology that are becoming increasingly important in the workplace. Her work involves teaching students about finance and technology through online courses that are accessible across the world. She explained to us the importance of doing what you feel is right for you and not what anyone else thinks is right, after her parents expected her to become a doctor or a dentist before she went into the finance world.

Next, each girl had their own timetable, and we all split off into five or so different rooms to hear different speakers. I stayed in the Great Hall to hear Q&A with a panel of eight speakers, all from different areas of

work, from the Arts to Business and Economics. While many topics were discussed by the panel, one main message that we all came away with was to speak out and not be afraid to have your voice heard.

After this, I headed off to a room on the fourth floor of the stadium to listen to Genevieve Raghu, the Artistic Director and Founder of the charity Into Opera. Genevieve set up her charity as a way of making the audience of operas more diverse and to spark interest among young people about opera. She began by studying English and Drama at Warwick University before becoming an assistant director and then going on to study at Cass Business School in order to found her charity. She helped us all to realise the importance of Arts subjects in all career paths, explaining how the Arts teach confidence and creativity that is necessary in all walks of life.

We all then had lunch in the seating of the stadium and, after a group photo was taken, we sat back down in the Great Hall to hear from Dr Stephanie Hare. Stephanie drew upon her education in History, Technology and Politics in her career as a researcher and broadcaster and encouraged us to do what we love and explained how specialising is not necessarily the best thing if you aren’t doing what you love. 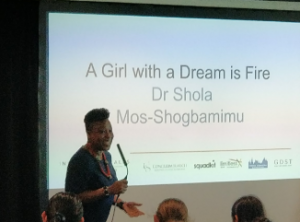 Then we were split up once again for two more sessions. My first one was with Dr Shola Mos-Shogbamimu, an incredibly engaging and inspiring speaker who even included some singing in her presentation. Shola is a lawyer and Political & Women’s Right’s Activist. Her session was titled ‘A Girl with a Dream is Fire’ and she inspired us all to follow our dreams and take all obstacles that we face in our stride. My main take away from her session was that ‘there is no full stop after your name, only commas,’ implying you can everything you want to and more. The second was a session from 18-year-old Rachel Appiah, who recently started a notebook company. She gave us some really useful tips on how to manage our time efficiently and get into good habits, for example, always reward yourself after you’ve done your work!

After these two sessions, we all reconvened in the Great Hall for a brief talk by Dr Shola, summarising her earlier session for the whole group. With a closing note from Cheryl Giovannoni, the CEO of the GDST, the day was wrapped up for most of us. However, some of us stayed on for the Dads and Daughters session.

The 50 or so of us who had stayed were joined by our Dads to begin the session with another quiz using the beach balls to answer questions such as ‘How much does a woman spend on her period in her lifetime (on average)?’ The answer to which was £18,000! The rest of the afternoon involved a panel of fathers and their daughters who answered questions and discussed everything from financial advice to how to achieve a balance between school/work life and home life.

Finally, we were spoken to by Cilla Snowball, Chair of the Women’s Business Council, with a summary of the council’s work to tackle issues such as the gender pay gap. She also gave us some parting advice from the men on the council, such as to relax, ask for help if you need it and be yourself!

All in all, we had an incredible and highly inspiring day and we would like to thank all of the people who made it possible.