Congratulations to Shivani in Year 8 and Thushika in Year 7, who have won prizes in the Fourth Plinth School Awards 2015, an annual competition open to all primary and secondary school pupils in London to design a sculpture for the fourth plinth in Trafalgar Square.

Set up by the Mayor of London, Boris Johnson the competition attracts thousands of entries and the theme for 2015 was ‘Live your Life to the Fullest’. 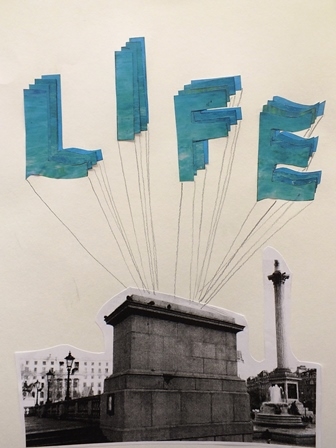 Thushika won the category for 12-15 year olds with her plan to display huge letters spelling out the word ‘LIFE’ and Shivani’s design of a huge blue pepper won a prize in the commended category.

The girls’ teacher Ms Teusink also received an award.  She won a Teacher’s Prize for evidence of wide discussion about the idea of the Fourth Plinth to inspire students and help them realise their creative vision.

Celebrated artist, Mark Wallinger, one of the UK’s leading contemporary artists, whose work ‘Ecce Homo’ was on the Fourth Plinth in 1999, presented Thushika with her prize at a special ceremony at City Hall. Both the girls’ designs were made into huge posters which graced the walls of City Hall and they also each received a prize of a big bag of Cass Art materials.