NHEHS girls, parents and staff were delighted with a strong set of A Level results today. 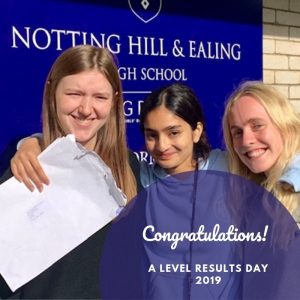 Despite concerns in the national press over the difficulty of the new Maths A level, over half of this year’s cohort chose to take Maths A level, with a 71% A*-A grades achieved. 67% of all Modern Foreign Languages grades were A*, a fantastic result, given that there is a national decline in students taking up languages in recent years.

Celebrating with her classmates today is Phyllis Keen whose two A*s and 1 A grades mean that she is heading to Imperial College to read Medicine.

‘I am so happy with my grades, which are down to my own hard work and the unfailing support and encouragement of my teachers at NHEHS. I’m also very proud of my classmates who leave NHEHS friends for life.’

Phyllis (pictured right, below) celebrates with eight classmates who also take up places at medical schools and seven who have accepted places at Oxford or Cambridge universities, amongst many other courses. 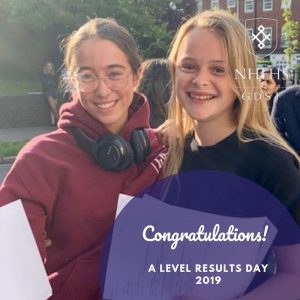 Headmaster Matthew Shoults said today ‘The girls’ results today show how much effort the girls, and the staff who support them, have put into their studies during their time at school and is just reward for their endeavours. The girls now head off to a wide range of courses and universities whether it be Medicine or Law at Oxford, History at Cambridge, Biomedical Engineering at UCL, Politics at Manchester, Economic History at Edinburgh, or Art Foundation courses. It has been such a pleasure seeing every girl finding the right path for them and doing so well.

They should be rightly proud of what they have achieved as are we.’