Eighteen Year 10 and 11 girls were up before the crack of dawn on April 14th to jet off for their residential home stays in the beautiful city of Montpellier in France. 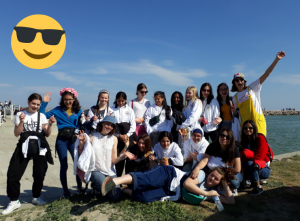 Despite a 3 am start to get to Gatwick for their flight out, the girls were keen to make the most of their four day visit and managed a sunny afternoon on their first day in France at the Carnon-Plage beach.

During the stay, the girls took language lessons every morning while staying with their host families, before heading out for group activities in the afternoons.

Their French improved rapidly with them all managing lengthy discussions over dinner with their hosts.

Staying with a variety of local families all over the city also meant getting in plenty of practice using the local public transport system, especially the trams which were excellent!

On the second day, the group were taken on a walking tour of the city, starting from the Place de la Comédie.  A highlight of the visit 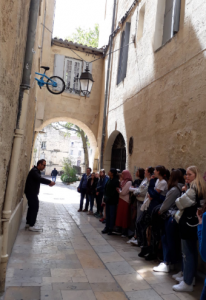 included a guided tour of Montpellier with the very enthusiastic Grant, which took in examples of the city’s eclectic street art. 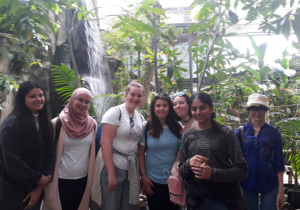 A photo treasure hunt was great fun for the girls to put their French into action as they had to find certain landmarks or objects around the city centre. They had to photograph evidence that they had found their “treasure” using old style disposable cameras – no Iphone selfies here!

On the final day, the group also visited an excellent contemporary art exhibition and Montpellier zoo, including “la serre amazonienne” where they encountered all sorts of exotic animals and spiders.

Thank you to the MFL department for organising a very enjoyable few days in a wonderful city!