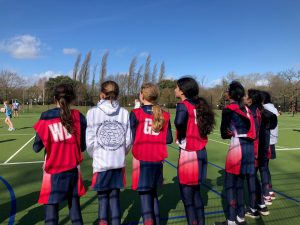 On Saturday 9th March, our Year 6 A and B teams travelled to North London Collegiate School for a netball tournament. After winning silver medals at the GDST Condover Hall Netball, we were determined to bring home more medals. As well as teams familiar to NHEHS taking part in the tournament (Bute House, Orchard House, Newland House, Berkhamsted) there were also many schools from North London and Hertfordshire.

Despite the windy weather conditions caused by Storm Freya, the A team got off to a flying start in their group winning their first match against Devonshire House 2-0 however, as the weather conditions gradually got worse, we had to play more cautiously trying not to throw too many long or high passes. Unfortunately, we drew our next match against Habs Girls 1-1 and lost against St Albans 3-4. We managed to win our next match v Radlett B 7-0 but with two wins, a loss and a draw and finished second in the group. 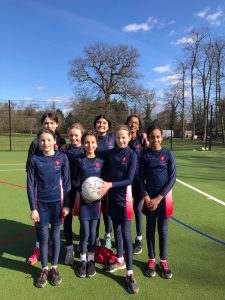 Going into the final stage groups, the U11A were placed in the second ranked group, meaning they would not be able to win the whole tournament. However, if they won all their matches they would be in with a chance of a medal. The pressure was on.

Playing in their brand new netball dresses the team played 100% better, beating Orchard House 4-0, Radlett A 5-3 and Glendower 7-0. The second last game in the group was against Habs, who we had only drawn with earlier. If we wanted to have chance of topping the group and winning a medal we had to beat them. The A team played fantastically winning 3-1 and won the B group.

The NHEHS B Team played against some really tough opposition in their first section matches, playing mainly A teams. With lots of 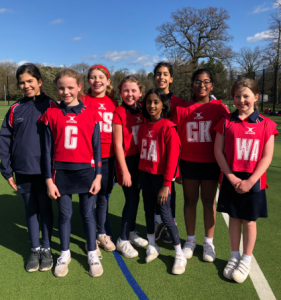 support from the A team (who sung the B team NHEHS song with pride), the Bs grew in confidence as the round went on, adapting to the windy conditions and working well as a team. After two losses, one win and a draw, the B’s were placed into Group C for the final round of matches against City of London, St Christina’s, Devonshire House and NLC A. All five schools were evenly matched with only one or two goals the difference in the scores. By the end of the final match, NHEHS B had won two and lost two of their last four matches.

Once all the matches had finished, squad NHEHS re-grouped and ate a delicious lunch courtesy of North London Collegiate and waited in anticipation for the results. 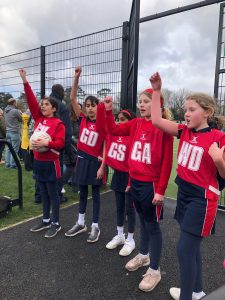 Our U11B were delighted to learn that they had finished joint second in their group, performing fantastically even though they were against stiff competition against some really strong A teams. Our U11A team were presented with lovely netball medals as group B winners and Morven (U11A) and Sofia (U11B) were awarded ‘I Love Netball’ bracelets as Most Valuable Players.

Thank you for all the North London Collegiate School for organising it and making this fantastic netball tournament happen!