The Senior School Dining room was transformed into a 1970s folk rock club last Saturday for an evening of murder mystery mayhem. 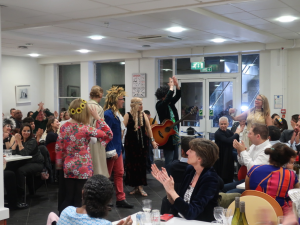 This Parents’ Guild event saw professional acting troupe The Murder Maestros, ably supported by some intrepid parents, acting out a fiendishly complicated ‘Whodunnit’. Between scenes a delicious Thai curry was served and our guests competed to solve the mystery.

There was no outright winner so prizes were awarded on the basis of best costumes and limericks. The parents had made a stupendous effort in dressing up, including an entire table of KISS band members and another of David Bowies.

The event raised over £1000 to fund equipment for the school. Thanks go to all who helped on the night and of course those parents who supported us by attending!