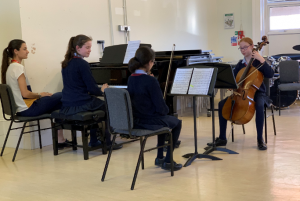 The Year 8 Piano trio made their way to Putney High School on Tuesday 26th February to take part in the South East Schools Chamber Music Competition.

Performing the third movement of Carl Reinecke’s Trio No. 3, they enjoyed an entertaining workshop with Richard Ireland, the adjudicator. He discussed the comedic nature of the piece, encouraging Chloe on piano to imagine her left hand on the piano as being the ‘buffoon’ and Shreya’s violin semiquavers were the joking interjections.

He also discussed how the interaction between the cello and violin was like two people interrupting each other from opposite sides of the room, fairly apt when describing Shreya and Ariella’s normal interactions! Chloe: ‘I really enjoyed hearing another take on the style of the piece, he made me understand things about the piece and see it in a new way.’

Our Year 8 trio really enjoyed their workshop – thank you to Putney High for hosting!