NHEHS Celebrates The Move To Ealing From Notting Hill

NHEHS Celebrates The Move To Ealing From Notting Hill 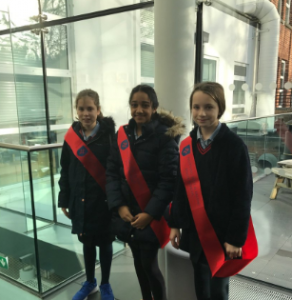 On Thursday February 7th we celebrated our school’s move from Notting Hill to its current Ealing home with a number of special school-wide activities, culminating in a wonderful ceremony in Ealing in the afternoon.

The school in Notting Hill opened on 16th September 1873 with 10 pupils – only one of whom had been to school before. Following the move to Ealing, the school re-opened at its new premises (formerly Girton House School) on 20th January 1931 with 237 pupils.

To mark the move, 46 intrepid NHEHS girls made the historic walk from 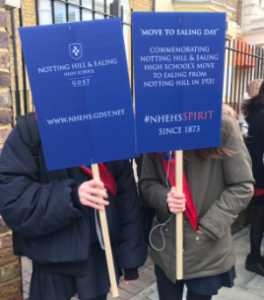 Norland Square in Notting Hill to Cleveland Road in Ealing, wearing red sashes and carrying placards commemorating the ‘Move to Ealing Day.’  Setting off at 10 am, the girls performed a short ceremony and then set off walking from W11 through Shepherd’s Bush and Acton, taking two and a half hours (with Percy Pig breaks) to cover the 5.1-mile-long journey. 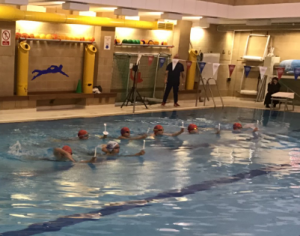 Back at school, our Juniors were not to be left out of the celebrations with a Year 4-6 maths relay race across the top courts. The Year 5 and 6 classes took part in their own heritage swimming race, which involved swimming two lengths of the pool while keeping their candles lit!

Keeping up the sports theme, some of our Year 9 girls had kicked off the Move To Ealing Challenge earlier in the week by rowing the distance between the old site in Notting Hill and the new school site in Ealing in under 11 minutes!

In the afternoon, the Senior School filed into the Hall, and were joined by NHEHS VIPs including two previous Headmistresses, Lucinda Hunt and Susan Whitfield, the Chair of the Old Girls’ Association, Jane Sigaloff, Dr. Nirupa Murugaesu (GDST Alumna of the year 2018, NHEHS 1995) and Madeleine Heggs (NHEHS 1948). Mr. Shoults told the story of the school’s move to Ealing with some inspiring anecdotes of the Head, Miss McCaig and her steadfast vision of the school moving to the ‘land of milk and honey’ in Ealing. A short, light-hearted piece of drama, performed by Senior School girls, brought Miss McCaig to life and afterwards, we enjoyed a revival of the old school song.

A delightful afternoon tea was then enjoyed by Year 13, teachers, staff and guests with Alumna Madeleine Heggs sharing her fond memories of the school in the 1930s and 40s.

A new tradition is born!