The Birth of a New NHEHS Tradition? 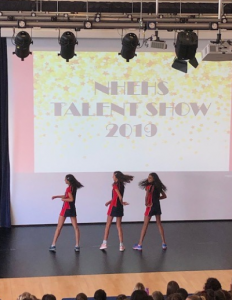 Just before the end of the spring term, we witnessed the first ever NHEHS Talent Show.

The idea originated in a Head Girls Team meeting then opinions were canvassed in school council.  The team made several announcements in assembly, organised a space for the performance, sorted out the microphones, dance mats and music and two prizes – a £50 Amazon voucher for first place and £25 for second. 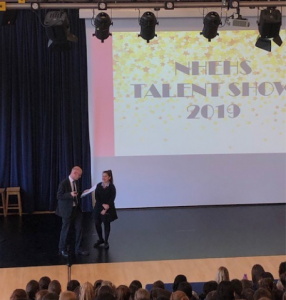 With entries from Year 7 through to Year 10, we enjoyed duets, singing, dancing and instrumental solos. Mr Shoults was an entertaining compere for the the lunchtime show, conducting mini interviews with all the performers and even throwing in some jokes along the way!  A funny moment came when Mr Shoults asked Salem and her sister Lohat, who performed a duet, who was in charge and the elder sister made it very clear that she was!

The quality of singing was excellent but the biggest surprise was probably the trio of dancers at the end who were hilarious!

The overall winners (£50) were Salem and Lohat in Year 7 and 8 and the Student Choice winner (£25) was the dance trio Keerit, Yasmeen and 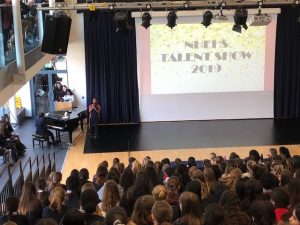 Jasmine. We really struggled to choose though – runner up was Matilda who wrote her own song. We also really enjoyed Eleanor’s performance of ‘A Thousand Years.’

I hope it does happen again – it was so much fun organising it and judging – and hopefully more people will get involved next year!