The December cold which faced the parents as they queued the length of St. Barnabas Church was soon banished by the warmth and enthusiasm of the girls’ singing.

Opening the performance was a charming solo from Amy from Year 6 with “Once in Royal David’s City” accompanying the Year 6 girls as they walked down the aisle carrying festive candles to the front of the church. In between the carols, the story of the Nativity was told by 15 of the Year 6 girls, with readings from the Bible, which they each delivered beautifully from the lectern to the congregation.

Musical highlights from Years 5 and 6 included a lively version of “Do you hear what I hear?” from the Junior School 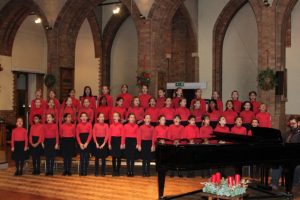 Singers and exquisite harmonies from the Chamber Choir in “O Holy Night,” as all those early morning practices paid off handsomely.

The girls’ linguistic abilities and memories were put to the test with French and German versions of “Silent Night,” while Year 3 and 4 continued the international theme with a Christmas duet based on traditional French carols with “Ding Dong Merrily on High/He is born.” Not to be outdone, Year 5 and 6 sang their own Christmas duet on “The First Noel” and Bach’s Minuet in G in a fantastic round.

We also took a moment to pause for reflection as Gwen from Year 6 read “In Flanders Field” by John McCrae, which 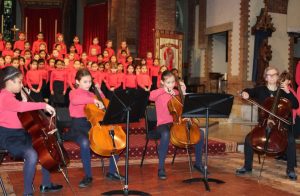 told of the first Christmas after the Great War. A quartet of cellists accompanied the final carol “O Come All Ye Faithful” as the congregation joined in in hearty voice, before Ms Silva wished everyone a restful and peaceful Christmas.

The proceeds of the retiring collection will be given to the Ealing Soup Kitchen and The Upper Room.