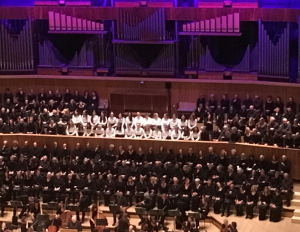 On Sunday 7th April, Grace Pang and I had the exciting opportunity of performing Bach’s magnificent St. Matthew Passion in the equally magnificent Royal Festival Hall. This was the first time I had ever performed the piece and definitely a performance I will never forget.

Our role in this grand work of music was as a part of the soprano Ripieno chorus, which was entirely made up of female students from schools across the country.

The main parts of the piece were sung by the Bach choir and accompanied by the Florilegium Orchestra so it was a privilege to perform alongside such talented musicians. Another inspiring part of the performance for me especially was hearing the soloists as I hope to study music and vocal performance in the future.

Prior to the performance, we attended two rehearsals in London where we were coached by one of the Sopranos from the choir and then by the director of the Bach Choir, David Hill. We worked intensely throughout both the rehearsals, working on our vocal technique, diction and ensemble.

The hard work was definitely worth it and we were thus able to put on our best possible performance on the day.

Overall it was a very special experience that I will never forget.