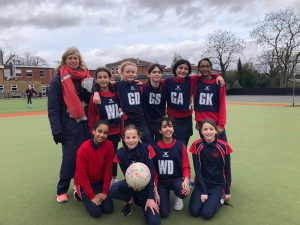 had been cancelled earlier in the week due to snow, all the girls were looking forward to playing in this tournament.

The number of schools taking part had increased to twelve from last year, and as a result the schools were divided into two groups, giving each school five matches in their group before the second round of matches would be decided.

NHEHS got off to a good start winning their first match 3 – 0 but unfortunately placement of the ball wasn’t consistently accurate enough, along with a lack of concentration, in the following three games.

As a result, the girls lost these matches by one or two goals. Determined to finish the group matches on a positive note, the NHEHS team went all out in their last group game to beat Pembridge Hall 5 – 2. After a short break, the final round of matches were announced. Unfortunately NHEHS hadn’t made it in to the Shield round of games but they soon put this disappointment aside and decided they were going to go all out to try to win the Plate group.

The final round of matches were against Pembridge Hall, Orchard House, LEH, Newland House B and Old Vicarage.

NHEHS were like a new team and went from strength to strength, winning all their matches. They were now in the 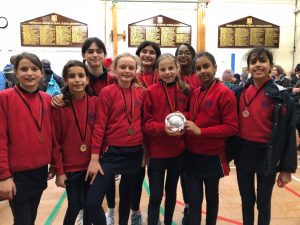 final and excited to be playing against Old Vicarage. There was a definite air of confidence in the girls before they went on court in the final and as the match progressed they totally dominated the opposition in both attack and defence. When the final bell rang NHEHS had won 11- 0 and were most definitely worthy winners of the Plate group.

It was a great morning of netball and all the girls were delighted to be going home with a medal and the Plate.