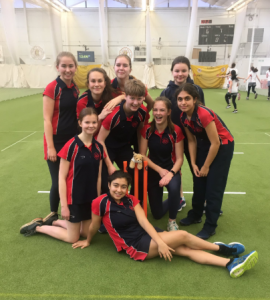 Last month, our U15 cricketers took part in the Lady Taverners Tournament (Middlesex Indoor County Championships) at Lord’s. In the first game, versus Queen’s College, Captain Ellie won the toss and we went into the field, with Sophie, Mia and Annika taking 5 wickets between them. Although our girls played really well, we were narrowly beat by QCL as we couldn’t quite make the 47 runs in the bat.

From then on, the girls really upped their game and beat St Paul’s A Team with an over to go. Great catches from Annika, Sophie and Charlotte, plenty of dot balls 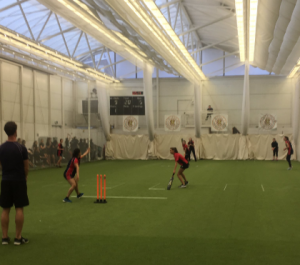 from Ellie R and lovely batting from Sophie, who had to retire having made 20 runs, really helped win this game. The girls as a whole all picked up the team energy and smashed this tough competitor.

The third game saw our girls step up another level and beat Francis Holland by 13 runs, an overall score of 74 with 5 wickets taken, this time really crossing the whole team but with particularly good bowling from Amelia and Ellie R who both bowled an opponent out. Excellent fielding here from the whole team, with Lauren, Charlotte, Evie and (U13) Ellie L being excellent support and playing to their strengths by swapping positions and keeping the energy up throughout. Great batting from Annika who was also retired at 20 runs.

Then the girls faced Godolphin’s B Team – another tough opponent. While we lost the toss, we won the game with some very exciting batting from all the girls; opening batters Ellie R and Sophie taking 12 runs in the first over (bearing in mind they were only 5 balls p/o) and Annika again retiring on 20 runs. 75 runs overall easily beat Godolphin’s 65 runs. 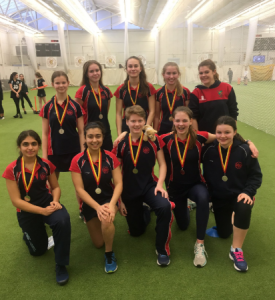 So, we made it to the final and faced the toughest team of the day – Godolphin’s A Team. We had a nice, steady run rate, taking 5’s and 10’s per over, on average but it just wasn’t enough for Godolphin’s excellent bowling and fielding. Although we made 58 runs it didn’t compare to the 118 we were chasing. A special mention goes to Amelia who twisted her ankle on the crease and kept batting well anyway, with Evie stepping in as a runner.

The girls did amazingly to get as far as they did and really deserve their silver medals. Well done all!