The week got off to a great start when we found out that our very own Games Captain JoJo was featured in this month’s national School Sports Magazine! You can read all about her busy sporting life here.

We also heard that Amelia Cayton and Hannah Kaprielian were selected for the U14 Middlesex Hockey Team – well done both!

Year 7 Alex Down qualified for nine events at the Swim Wales National Short Course Championships at the end of November – good luck, Alex! 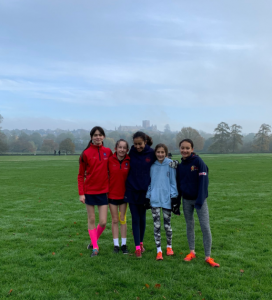 The Junior cross country team finished 9th at the Regional Finals at Verulamium Park in St. Albans on November 9th – this was a super result seeming as two of the top runners were injured on the day and did not run! Huge well done to Nicola (who came in 13th place), Natasha, Emma and Yasmin (Eadi and Rosie both injured). 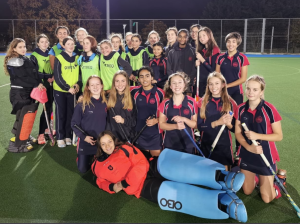 Our first XI travelled away to Godolphin & Latymer to take on our hosts’ U18B team and took the win 1-0 (MVP Alice).

Closer to home, our U12C team played against our U11A team losing narrowly 1-2 at home in a friendly game.

Our U14A netballers took part in the Middlesex Preliminary Tournament on November 9th. Despite playing well throughout and winning five matches out of seven, the team unfortunately did not qualify for the Middlesex Schools Finals in March, losing out sadly on goal difference. 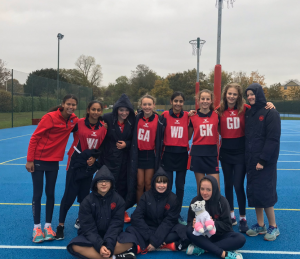 St Paul’s Girls School provided our opponents for our U12 ABC teams on a chilly evening at Ealing Trailfinders on November 12th. All three teams were victorious with the A team winning 13-3 (MVP Natasha), B team winning 9-3 (MVP Olivia) and the Cs winning 9-7 (MVP Zoe).

Our U12 and U13A swimming teams were also winners on November 14th as they played host to Godolphin & Latymer.