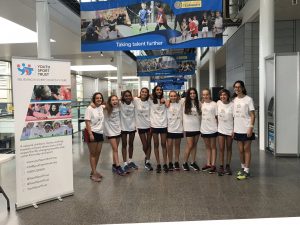 Ten girls travelled to Bath for this excellent sports conference – please see our Twitter for more photos. The highlight was listening to Dr Nic Wetherill on ‘Polar Performance’ about the first female novice group to walk across Antarctica in 75 days and hearing former England netball captain Pamela Cookey on how to balance your passions. 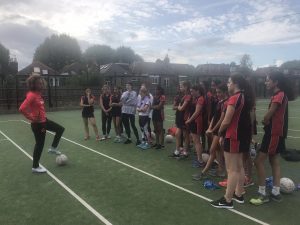 Our netball season got off to a great start with a Netball Coaching Workshop for Years 8-13 led by Serena Guthrie (England captain and Commonwealth Gold medallist), Kadeen Corbin (England netballer and Commonwealth Gold medallist), Emma Thacker (England U17/U19 and now long squad U21) and Philippa Fleming (London Pulse). A second netball coaching workshop was held for our Year 6 & 7s the following week, this time led by former England netball captain Ama Agbeze and current England Rose Vicki Oyesola while we welcomed back for a second time Kadeen Corbin and Emma Thacker.

For our first week back we held netball trials every night and we were especially pleased to have over 70 girls taking part in our U12 trials!

Competitive fixtures started back from 11th September with the U18A taking on Putney High at home in the SistersnSport National Netball Cup first round, with a 31-53 loss (MVP Isabel). Our U14As also took on Putney at home in the same competition, also losing (22-34) (MVP Caitlin).  Four teams played South Hampstead High School at home with NHEHS taking all four wins. The A team won 24-5 (MVP Sephera), the Bs 18-3 (MVP Lydia), the Cs 11-2 (MVP Leah) and the D team 17-10 (MVP Chloe). Well done to everyone!

In a much anticipated annual fixture, our U18A team played the NHEHS Old Girls team as part of the OG Tea Party on September 14th and won 27-11 (MVP Victoria).

Our U12 netballers played their first ever competitive match for the school in the SistersnSport National Cup when they were drawn at home to Haberdashers’ Aske’s School for Girls on 16th September. NHEHS won 19-9 in a close game with MVP Dana and Julia. In the same competition, our U13A team had a great win vs. City of London School for Girls (45-7) MVP Ella. Our U16B played St Benedict’s U16 A team at home in a friendly and won 12-5.

In addition to our Cup & friendly matches, we were also participating in the annual Ibstock Place Netball Tournament.

It was a fantastic start to the season for the U12 team, who faced Surbiton High School in their first match, losing by just one goal. NHEHS then won the rest of their games in their pool to qualify for the semi-finals. In the semi-finals, NHEHS met Godolphin & Latymer, and after a slow start, we pulled away to take the lead 11-3. This meant the team qualified for the final when we met Surbiton for the second time. It was a very competitive game, with the final score being 5-5 forcing extra time. This led to 2 minutes extra time which ended 7-7 and then another 2 minutes of extra time where Surbiton edged the lead by 2 goals to win the tournament, so our U12s finished second out of 10 teams in the tournament. A great start to the season! 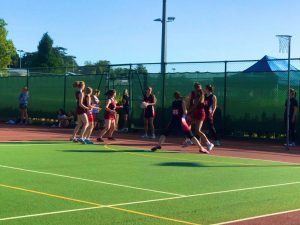 Our U18A netballers enjoyed a great day of netball at the same tournament where they won all their pool matches convincingly: 10-1 vs Godolphin & Latymer, 8-0 vs St Catherine’s, 11-4 vs Highgate, 10-5 vs Tiffin Girls and 11-6 vs Harrodian School. In a brilliant semi-final they narrowly lost 6-7 to Surbiton High but took the win in the playoff vs. Highgate 9-3 to finish 3rd from 10 teams. MVP Alexandra.

NHEHS U13A played Tiffin Girls, Broomwood Hall, Kingston Grammar and Surbiton High, qualifying for the semi-finals, but narrowly lost out to Surbiton in the final, to finish 2nd in the tournament. Well done!

Our U15A team also took part in the Ibstock Place event where they came 3rd of out 10 teams.

Our first friendly hockey match of the season saw our U16A play the American School in London where NHEHS were victorious 2-0 (MVP Sophie).

Our U13 & U14 tennis teams played in the Aegon Cup home to Queen’s Gate School and both won through to the finals on October 3rd! Good luck, girls!