Last Sunday, our team of staff and parent runners set off to complete the challenge of the Ealing Half Marathon to fundraise for local Northfields charity The Log Cabin. A mix of enthusiastic runners, seasoned half-marathoners and first-timers, the NHEHS team were never far from supporters cheering them all along the 13.1 mile route.

Waved off from Lammas Park by Ms Silva, the first water station was a welcoming sight a couple of miles into the run with several NHEHS girls volunteering at St. Peter’s Church. Then, ahead of the tricky Park View Road hill, two large groups of NHEHS girls congregated with their parents to wave  brightly-coloured banners and hand out sweets.

Pitshanger was peppered with teachers and supporters encouraging the team with “Go Notting Hill!” to every runner in the NHEHS red and blue t-shirt. Back on familiar (and flattish!) ground along Wimborne Gardens outside the school, teachers and girls boosted morale with much-needed jelly babies and high-fives after the Kent Avenue incline. Four miles down the road after conquering the notorious Greenford Avenue hill, the team were homeward bound but just as the legs began to tire, up popped up more amazing support in Hanwell! 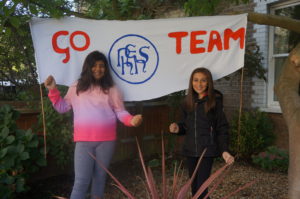 Feeling almost like local celebrities, the whole team loved hearing all the girls cheering their names and for the school with other runners quipping “You seem to know a lot of people in Ealing!”

With seemingly the whole of Ealing out on the streets, backed by steel bands, serious sound systems, jelly babies and noisy NHEHS supporters all over the course, the incredible #EalingFeeling inspired many of the team to achieve Personal Best times. Some have even signed up already for next year!

All chalking up their own PBs were our sporting role model teachers from the team, Mr Shoults (1 hour 42 mins), Mr Smith (1 hour 27 mins), Miss Bushell (1  hour 33 mins) and Mr Stocker (who ran incognito in under 2 hours!).

So, how was the EHM for them?

Highlight of the day?

Mr Shoults: Fantastic support from girls, staff and parents, including banners, including jelly babies which were much needed. 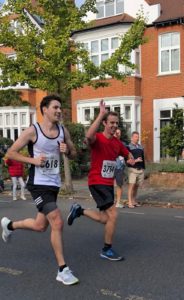 Mr Smith:   Having the support of the school community on the way round – hearing lots of ‘Go, Mr Smith’ really helped. The guy I was running with at one point said to me it was like he was running with a celebrity (I’ll take that so thank you all for making me feel a little famous for an hour and a half). Also getting to see my 20-month-old son half-way round the course. He had a great time clapping and waving at the runners. Now, if asked where I am, he explains ‘Daddy run’.

Miss Bushell: For me the best part of the day was seeing all the girls – or hearing their cheers even if I couldn’t quite pick out all of the faces.  It means so much to have people cheering you on by name, although the pacers I was close to were very confused as to why people kept on shouting ‘Miss Bushell!!’

How do you feel having achieved it?

Mr Shoults: A great first year for the NHEHS team, with lots of money raised for Log Cabin.  This feels like the beginning of a tradition!

Mr Smith: I am so pleased that everyone helped raise money for such a good cause in the Log Cabin.

Would you do it again?

Mr Shoults: Yes, once the aches have faded.

Mr Smith: Yes – it had a great atmosphere and I have enjoyed being part of a running club as part of the training.

Miss Bushell: I will definitely do it again next year – 2019 will be my seventh EHM!  I’ve done several marathons, and I’m now looking forward to the last couple of weeks of training before Abingdon at the end of October. 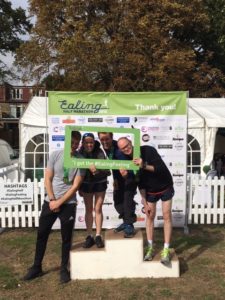 Thanks to the team for an amazing effort and for all the generous donations to our Just Giving Page for The Log Cabin, who do such valuable work supporting children and young people with disabilities and additional needs. We have raised over £5,000 so far and you can still donate here until October 19th.

Would the team do it again? Definitely.