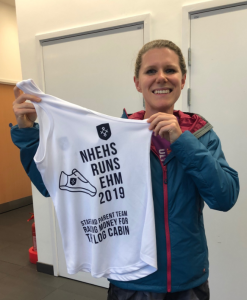 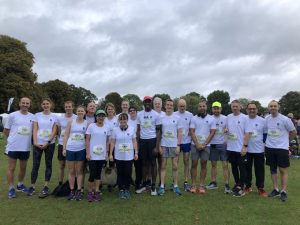 Our staff-parent team hit the streets of Ealing last week in the Ealing Half Marathon for the second year in a row to raise money for The Log Cabin, a local Northfields-based charity who help children with disabilities and additional needs.

The much anticipated rain just about stayed away for the race itself and certainly did not deter the many friends and family of Team NHEHS who lined the route from Lammas Park, through 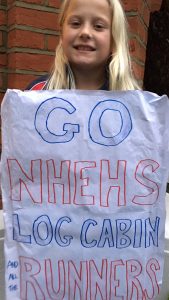 central Ealing to Pitshanger, outside NHEHS and along the roads back and forth from Hanwell. Seeing the homemade NHEHS banners, hearing the “Go Notting Hill!” cheers and the generous quantities of jelly babies helped our team all make it to the finish line back in the park.

In addition to our parents, NHEHS was represented by Headmaster Mr Shoults (pictured below with former Deputy Head Mr Smith) and Head of Sixth Form, Miss Bushell. We were also very impressed to see two of our Sixth Formers also complete the challenge – congratulations Savarna and Amira! 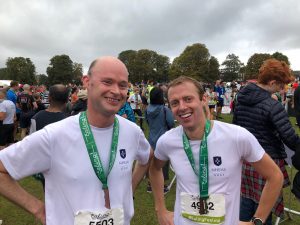 So, how was the EHM for our intrepid team of enthusiastic runners, first-timers and seasoned half-marathoners ?

What was your highlight of the day?

“All the NHEHS support during the race, many more banners and individuals along the route than last year. From the shout outs and jelly babies to the sixth former offering me congrats at the finish it was great. All the more impressive and helpful given the weather!” – Ann (Parent Year 11)

“The amazing support along the way from NHEHS pupils including my wonderful daughter Eadi. ” – Jake (Parent Year 8)

“Seeing my family and next door neighbours at various points in the course cheering me on and trying to hand me jelly babies….. strangers cheering 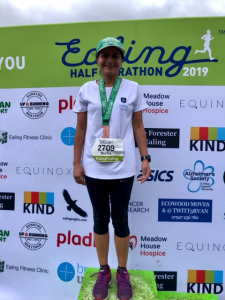 “go Notting Hill” as I ran past and probably the funniest was hearing a voice shouting very loudly “GO RICHA” near the start, turning around and seeing Ms Silva  cheering me on at the top of her voice! – Richa (Parent Year 9)

“Seeing lots of support from NHEHS girls and staff all over the route!” – Charlotte (Parent Year 7)

“Getting that “Come on Notting Hill” cheer just when your energy levels are dropping was incredible! Almost felt like a local celebrity in parts!!” – Sarah (Parent Year 4 & 7)

“Apart from seeing the 12 mile board, it’s the support one gets from the crowds shouting for the school, the charity (and once or twice for me).” – Mark (Parent, Year 9) 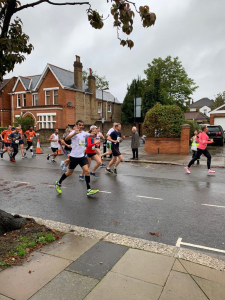 How do you feel having run the EHM?

“I assume “sore” has been quite a popular answer, so I’ll go with “Looking forward to a few sedentary days!” – Andrew S (Parent Year 1)

“We literally hit the start running having arrived in Ealing without our race numbers (!), but the adrenaline was flowing and I can honestly say I was surprised to see the 2 mile mark after what seemed like a few minutes! We were supported round the course and up the hills by a wonderful and enthusiastic well-wishers and it was lovely to hear ‘Go Notting Hill’ at various points! I loved EVERY moment, Dom remembered that he really doesn’t like hills! But we made it!  I found the whole event really emotional and got a PB so I’ll DEFINITELY be running again next year!  And jury’s out for Dom… but I reckon he’ll be persuadable!” – Cheryl & Dom (Parents Year 8)

“It was my first EHM. Running through the local streets I know so well unimpeded and cheered on by loads of people made it a great day. I beat my PB by 8 secs which, given how hilly the EHM is, was a big achievement for me.” – Stephen (Parent Year 8)

“Delighted to have made this a part of my autumn calendar and pleased to have been able to encourage donations to a great local charity.” – Mark 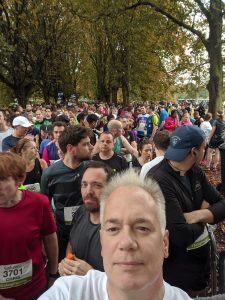 Would you do it again?

“I love EHM for the amazing community feel – seeing so many friends and neighbours along the way … this year, my third EHM, was even more special for 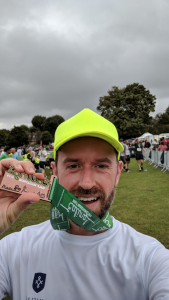 helping to raise money for a local community charity. I thought this might be my last half marathon… but never say never!!” – Richa

“Yes! Great charity to run for and really lovely to get to know the other NHEHS parents.” – Sarah

“Absolutely I have run other half marathons but none as friendly,encouraging or as easy to get to!” – Ann

“Yes, I’ll be doing it again, and will be pleased to be part of the school group.” – Mark

“Yes for sure, I want to make it an annual thing and would be happy to support NHEHS and the Log cabin again.” – Anis 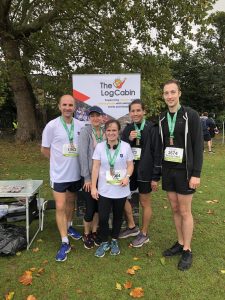 We have raised over £5,000 so far for The Log Cabin, but there is still time to donate to our 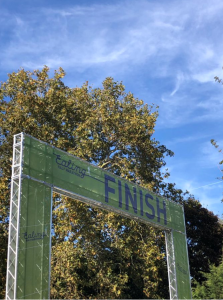 We will also be on the lookout for more runners for our team for next year’s Half Marathon, so why not join us?