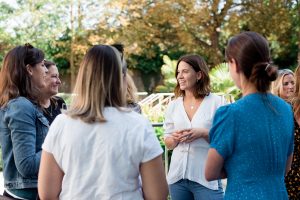 There were speeches by the OGA Chair, Jane Sigaloff, who spoke of the evolving role of the OGA Committee and the excitement of all things new as she steps down this Autumn after 12 years in the role, to be replaced by Zosia Thackray (née Kulesza).

The speeches were followed by tours of the school buildings, old and new,  and the annual OG V 6th Form netball match at 4pm.