A “leech camp,” wading through waist deep water, ant bites and negotiating treacherous muddy slopes as the rain lashed down were just some of the unique hurdles Team 1 of the NHEHS World Challenge faced this summer.

The 17-strong team enjoyed quite a contrasting trekking experience from their Team 2 colleagues and from what they had expected themselves. After a few days in Phnom Penh, they swapped hostel rooms for hammocks in the jungle as they set off on a five-day jungle trek. 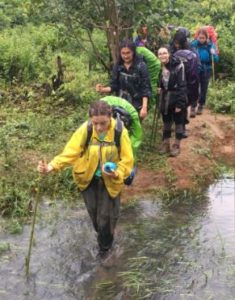 Excitement and anticipation ahead of the physical challenge however soon turned into a mental test. The team struggled to keep their feet (and backpacks) on the 4-hour daily trek amidst the mud and the most rain that Cambodia’s Ratanakiri province had seen for 14 years, made worse by a dam bursting in neighbouring Vietnam. One camp contained so many leeches it became known as “leech camp!” The hammocks which they had so naively looked forward to sleeping in became drenched from the sheer deluge of water that fell from the canopy, with the structure of one even collapsing due to the weight of the water. Waking up in the morning some girls found leeches attached to their legs while everyone had to remember to check their shoes for scorpions!

Understandably, morale wavered from time to time but the girls all looked out for each other and lifted their spirits with chapters from Charlie & The Chocolate Factory and songs. But the girls agreed that the trek had brought them all closer together, particularly as the Year 12s & 13s had not known each other that well before the trip and all felt extremely proud to have completed the trek as a group in the conditions. 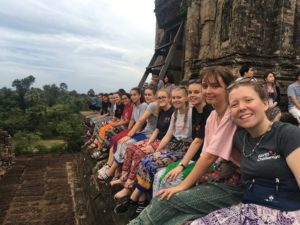 Leaving the jungle behind, the group moved on to Siem Reap (including visiting temples, street markets and watching a circus) which came as a huge contrast, making the girls appreciate even more the daily struggle of the Cambodians who lived in the jungle.

As part of their voluntary work on the trip, the team spent several days painting and renovating a school in Surin in Thailand. In the afternoons they played football and taught English through songs to local children whose English was very limited as they lived in such a remote part of the country.  As the girls were leaving, the children brought them flowers from the jungle and homemade cards as they lined the road to say goodbye. 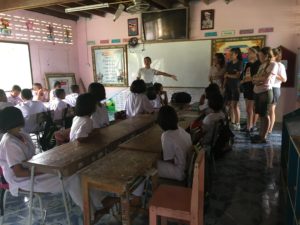 The team also visited the harrowing Genocide Museum to learn about the Khmer Rouge and the Killing Fields. There was a definite sense of outrage and guilt among the group that the atrocities were not better known throughout the western world, particularly as the sensitivities surrounding recent history were never very far away. The visit to the museum in the Khmer Rouge’s secret Security Prison 21 (S-21) put it into context – explaining why the team’s guide was only willing to discuss history and politics when in the jungle, with less chance of being overheard.

Returning to London, the girls expected things to have changed hugely in the three weeks they were away and disconnected from their connected worlds, but in fact very little important had changed. Some girls even said they hadn’t missed their mobile phones but the trip made them appreciate many of the things we take for granted such as being able to turn on a drinking water tap whenever they wanted to or to choose whatever they wanted at a café.

Some of our highlights:

Scariest moment: When one the trees collapsed in the jungle onto the tarpaulin as the girls were sheltering one day from the rain.

Most disgusting moment: The smell of jackfruit (which we thought was a gas leak)!

Funniest moment: Miss Cagnino misjudging the depth of the river and falling in!

Best moment: Snorkelling at the beach.