Pokemon Go Launches Us Into An Augmented Future

Pokemon Go Launches Us Into An Augmented Future

On the 6th of July 2016, one game came out that took the whole world by storm; with tens of thousands of players going outside in a frenzied attempt to ‘catch them all’. Of course, this game was the extremely popular Pokémon Go, a smartphone game that followed the normal Pokémon premise of finding and catching creatures in order to then use them to fight against others, but with a twist. Normally, a Pokémon game would involve the player exploring a digital world on a DS or computer, but Pokémon Go had an element that set it well apart from the rest: Augmented Reality. 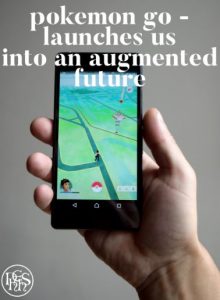 Augmented Reality involves adding virtual aspects to a real-world environment that are triggered when the camera is positioned over a certain image or place. This feature can be used in all elements of digital life from the gaming industry to advertising to media as it gives the consumers of the product a feeling of immersion and that they’re adding a personal element to the experience. With Pokémon Go, players could find Pokémon around their house or area, with the game even having special creatures for different countries.

The Year 10 Da Vinci Programme tackles ideas and concepts beyond the normal school subjects, so in the most recent Year 10 Da Vinci Programme session with Mr Futter, we looked at how far new technologies could enhance our learning in different areas. We were tasked with creating our own interactive photo using iPads and the HP Reveal Augmented Reality software whilst also learning that Augmented Reality could be used for everyday tasks such as filling in homework and revision by just holding one of the iPads over a sheet!

Although it is still in quite a basic stage, Augmented Reality has the potential to change the way that we live our everyday lives from the adverts that we come across to the food and clothes that we buy. We will be watching this space very closely, and virtually, of course!