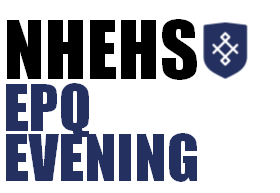 Following the success of the EPQ evening at NHEHS back in February, over 30 Year 12 students presented their Extended Project Qualifications (EPQ) to fellow students, staff and parents earlier this week. The event was held to celebrate the girls’ success in completing the Extended Project, with audience invited to attend different presentations according to their interest and ask questions after each one.

An EPQ is an independent research project which involves writing an essay of around 5,000 words, or creating a product and must be accompanied by extensive research, a written report and a presentation. It is designed for 6th Formers and enables students to develop their abilities to learn independently, use their learning experiences to support their plans for further study or career development as well as transfer skills developed as part of the project to other areas of study. It can also add considerable value to university applications. When selecting a project, girls are encouraged to consider a wide variety of ideas for inspiration, including their hobbies/interests, current affairs, but also their career/university course aspirations or which A level they would have liked to take but did not.

Thirty four candidates presented on a wide range of topics ranging from the human genetic modification to mental health stigma to plastic pollution via Oscar Wilde, including:

Would incorporating 5G into (fully autonomous) cars make them safer and what are the benefits and problems that it brings?

To what extent can musicals reflect political issues?

To what extent could modern day society function properly without the idea of money?

Is mental strength or physical strength more important to succeed in rugby?

To what extent is criminal behaviour a significant component in psychopathy?

How far did the Political Campaigning of 2016 cause the result of the EU referendum?

A drinks reception followed the presentations, as did the opportunity for further discussions among the girls and parents.

Thank you to everyone who took part or came along to watch. The presentations were outstanding and were the culmination of a year of independent study. We have record numbers for EPQ this year and we are looking forward to even more next time!