Rocking the Stage at Party in the Park

Rocking the Stage at Party in the Park 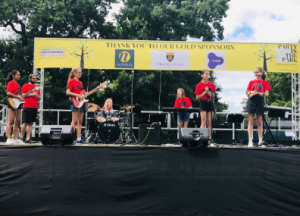 Glastonbury may have taken Somerset by storm this year, but in Ealing, our Jazz and Rock Bands stormed the stage at Pitshanger’s annual Party in the Park. 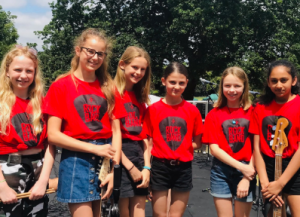 Opening the event at 1pm last Sunday, 30th June, our Rhythmic Rockers, aka Generation XX, nailed their performances of Adele’s Rolling in the Deep and Daft Punk’s, Get Lucky, while our Jazz Band performed Glenn Miller’s In the Mood and Weather Report’s Birdland, to tumultuous applause.

Rupa Huq MP, NHEHS alumna, who, along with Ealing’s mayor, Cllr Gulaid and MP, Steve Pound, officially opened the days’ events after the girls performed, referring to her time at NHEHS as “the best school in the world”.

Party in the Park is an annual event in the heart of the Pitshanger community. The event itself was first enjoyed as a celebration for the new Millennium and has been going strong ever since. NHEHS were proud sponsors of the event.