Second Year in a Row Win for NHEHS at the IET Faraday Engineering Challenge!

Second Year in a Row Win for NHEHS at the IET Faraday Engineering Challenge! 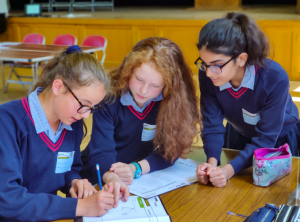 The IET Faraday Challenge Days are held at schools and other venues around the UK.

The IET (The Institution of Engineering and Technology) is one of the world’s leading professional societies for the engineering and technology community.

The Faraday Challenge Days give students the opportunity to research, design and make solutions to genuinely tough engineering problems.

The teams were briefed on the working and difficulties behind construction and transportation of the James Webb telescope – the new international telescope being launched into space in 2021 to give us the clearest imagery of the universe yet.

The task involved design and construction of part of a problem solving solution followed by a presentation on their tasks, considering the successes and failures.

Both teams did exceptionally well. NHEHS’ working model of a clean room door entry system particularly impressed the judges, but overall it was the other team of

Genevieve, Leela, Heather, Sophia, Chloe and Ansley, who excelled across all the tasks and were awarded the Faraday Challenge Trophy.

This made it the second year in a row that NHEHS had won the trophy!