German is taught from Year 7 upwards.  Proper attention is given to  all four language skills: listening; speaking; reading and writing but from the very start there is a strong emphasis on speaking skills to improve pronunciation, fluency and accuracy and girls regularly work in groups and pairs.

In the early stages grammar and vocabulary are taught in the context of topics and there are plenty of opportunities to learn about Germany and its culture and society.   Those choosing German at GCSE  level will find that the course gives them a strong foundation, while sessions with our language assistants improve fluency and confidence in speaking and help to  prepare them for the speaking examination. 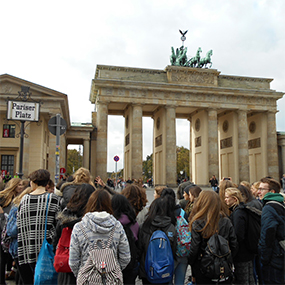 Learning German at A Level will give students the the opportunity to develop their skills to a high level and they will learn to debate and express complex opinions in both written and spoken German. The course is deeply rooted in the culture and society of German speaking countries and includes the study of German film and literature. Girls at this level work increasingly independently, using a variety of resources, including websites, television programmes, newspapers and magazines.

German has retained its status as one of the world’s most important languages. As well as being the medium for access to the work of some of the world’s greatest artists, writers, musicians, philosophers and scientists, learning German has other advantages in the twenty first century.  It is widely cited as the second most important language on the internet and 10% of books published today are in German.  The German economy ranks number one in Europe, third worldwide and Germany is the world’s most successful exporting country and the UK’s second largest trading partner.