The Art of Lying & How to Spot Liars in Everyday Life

The Art of Lying & How to Spot Liars in Everyday Life

About The Da Vinci Club

As a Year 10 student, one gets a bi-monthly opportunity to get involved in and learn about a wide variety of different topics in the 6th Form Centre, known as the Da 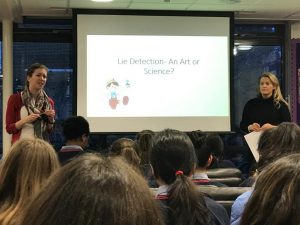 Vinci Club. These meetings entail listening to and questioning a handful of teachers about their chosen topic over the course of the year, from Brexit to criminology, from ethics to making music out of algorithms – the Da Vinci Club covers a lot, come along one day and you too will probably learn something new!

We attended to the latest session of the Club, run by Miss Prendergast on liars vs. truth tellers: The art of lying and how to spot liars in everyday life.

These are some of the telltale signs of liars that we discovered from the session!

Elongated pauses and delayed reactions to answering mostly obvious questions are one of the more obvious signs of detecting whether or not somebody is not telling the truth. This is because of the neural load that lying enforces onto the brain, requiring far more brain power to be used in lying than in telling the truth.

When lying, people can often tell straight away if they become disconnected from what you are actually saying and instead focus on your posture, amount of eye contact and harshness of tone. This will happen when you stutter a lot, say things like ‘like’ too many times etc.

Touching of the face (especially cheeks) or fiddling with hair

Know someone that is confident and usually open? With these types of people, it is often very easy to tell if they are lying because of the fact that are irregularly touching their face or their hair when speaking to you. This is a difficult one to be sure about, though,  due to many people often just doing this as a sign of nervousness or habit.

Since the age of around four years old, we are taught that lying is wrong and owning up is always the best policy, however if you ask a group of people, “Are you good at lying?” mostly the answer will be yes, often said with pride. This is because we lie on average 114 times a day, making lying into a necessary skill that people will, without realising it, take pride in.

You may even be a pathological or a compulsive liar, feeling overwhelmingly compelled to answer a question with something that is not true or even just a slight stretch of the truth. Sometimes, stories that you tell of events  may even appear true to you, especially if the event took place a long time ago or happened at a point in time where you were exhausted. This idea of perception and the reliability of the human memory is still very much uncovered in science so think carefully about the next story that you tell and open your eyes to see how many people are lying……………