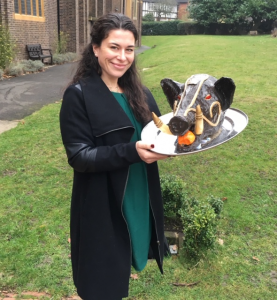 It’s that time of year again when we celebrate a very special and unique NHEHS pre-Christmas tradition – The Boar’s Head Carol.

On Tuesday morning, a boar’s head made of papier mache will be processed down the aisle at St Barnabas Church by the Head Girl, followed by the rest of Year 13, all singing the ancient Boar’s Head Carol.

The Boar’s Head procession has been part of Notting Hill life for over 100 years and has become well and truly established as one of the pre-Christmas traditions of the school.

So far, we have not been able to establish when or why the Boar’s Head procession began here as it is associated with a men’s college in Oxford (Queen’s) and there were no male teachers at the time who could have introduced it.

However, we do know that in 1911, the GPDST Council decided that it was ‘inappropriate!’  In 2010, only three English schools held the procession – Hurstpierpoint College, Millfield and Notting Hill, but it is fairly certain that we are the only girl’s school in the world to have this ceremony.

The Queen’s College version of the carol, which is used at Notting Hill, was published in 1521 and is therefore thought to be the first carol to be printed in England.

The story behind the carol relates to an Oxford student who, while out walking, encountered an angry boar. Fearing for his safety, he rammed the book he was reading down the gaping throat of the animal and suffocated it – ‘sage’ overcoming ‘savage!’ 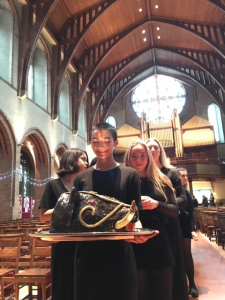 The boar’s head in hand bear I
Bedecked with bays and rosemary
I pray you, my masters, be merry
Quot estis in convivio

The boar’s head, as I understand,
Is the rarest dish in all this land,
Which thus bedecked with a gay garland
Let us servire cantico.)

Our steward hath provided this
In honor of the King of bliss
Which, on this day to be served is
In Reginensi atrio

The 2018 Boar’s Head Carol is captured on video on our Old Girls’ Association Facebook Page here.