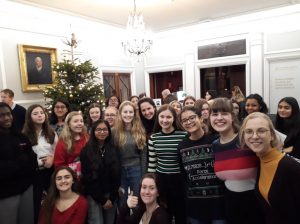 On the 14th of December, a group of students, along with Mrs Drummond and Mr Quarmby, eagerly made their way to the Royal Institution in order to watch the highly anticipated Christmas lecture series, presented by Hannah Fry.

After arriving in the theatre, the lecture began with a competitive game called “Wifi Wars” where the audience was divided into two teams in order to play a series of fun, and may I add intense, games such as Pacman. Sadly, our side lost, however we quickly moved on from this defeat when Hannah Fry ran onto stage along with fellow mathematician, Matt Parker.

Since the lectures are filmed for BBC 4, we were quickly briefed on everything from how to clap properly to how not to make eye contact with the cameras – definitely harder than it looks! The lecture was titled “Secrets and Lies” where Hannah explored different elements of Mathematics with the help of Matt Parker, including how to train match boxes to play a game of noughts and crosses to demonstrate the reward based learning AI can undertake. Another highlight of the talk was when a guest speaker, who specialises in computer programming, came onto stage to demonstrate how to take a simple pixelated image of a square and make it behave like a virtual firework. After demonstrating how to do so, the audience was even able to play a voice activated game with the aim of getting the firework to pass through as many obstacles as possible where the louder you are, the higher the firework rises.

Overall, the trip was a huge success and we definitely learnt that when faced with certain obstacles in life, by using mathematics to execute particular tasks, such as creating a piece of code, these challenges can easily be overcome.