The Whole of NHEHS “Blings Their Bins!”

The Whole of NHEHS “Blings Their Bins!” 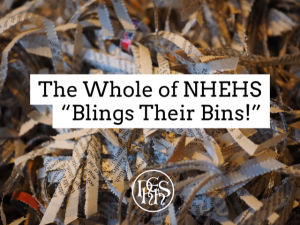 Have you ever wondered how you get people to recycle paper rather than just putting in the bin? You hold a school-wide competition on how to do that with the simple idea of “blinging your bin.”

Well, what does it mean to “bling your bin”?

The idea dated back to 8:45am on a Monday morning during assembly when we were all told about the competition. The Head Girl Team asked us to make a poster which made people want to recycle, and to make it even better, they told us that there was a chocolate prize for the best form’s poster (that was when everyone became excited!).

On Wednesday morning, all the forms from year 7-11 began to create the posters – some posters had rhymes and slogans (“bin there, done that”), some had drawings on them and some just had arrows and words stating, “please recycle here” in bold letters. One form even had the idea of doing a meme!

The posters are currently being judged by the Head Girl Team, and so we wait with bated breath to hear which form’s poster is deemed the most likely to encourage students to recycle, and we look forward to seeing it above every recycling bin in the school next week!