There’s a Story to be Written and Told Every Day at NHEHS! – Year 10 Journalist Leaders

There’s a Story to be Written and Told Every Day at NHEHS! – Year 10 Journalist Leaders 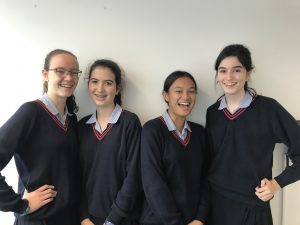 The Year 10 Leadership Programme gives girls the opportunity to take up specific roles which the girls may apply for: Journalist Leads, Eco-Reps, Digital Leads, Debating Leads and Volunteering Leads. The concept behind the programme is for each leader to come up with her own ideas to do something meaningful around the school and make those ideas happen.

As our team of Year 10 Journalists come to the end of their programme this half term, we asked them about their experiences as our first ever NHEHS Journalist Leaders.

Sofia – I was interested in telling stories of people at school who had never had stories told about them before.

Isabel – I wasn’t sure what I wanted to do as a career, but enjoyed writing so I decided to apply to be a Journalist Leader.

What tasks were you set and how did you approach them?

Li An  – In weekly meetings, either alone or in pairs, we would be given an event or topic to research and write about within the school. Over the next week or so, we would interview and talk to the relevant people and then write a short article on what we found. This meant we got to interview teachers, students, and even visiting poets on subjects ranging from Duke of Edinburgh expeditions to the Year 7s’ first impressions of NHEHS! We even wrote a poem about everyday science at NHEHS! This gave us a great insight into all the different activities going on in the school.

What was the most challenging thing about it?

Li An – I would say that writing the articles when I first started was challenging, as I didn’t always know how to go about writing them. After a few articles, however, the writing became more natural, and instead sticking to deadlines and finding willing people to interview proved to be a tougher challenge.

Isabel – Definitely tracking people down to interview or talk to for our articles within our deadlines!

Was there anything you didn’t expect?

Li An – I don’t think there’s anything enormously surprising about being a journalism leader except, perhaps, the vast number of events that go on throughout the year. You might not expect it, but there is probably a story to be written and told every day at NHEHS!

What have you learned that can be used elsewhere?

Li An –  I have definitely improved my writing skills and now enjoy writing and interviewing others far more than I did before becoming a journalist leader. I have also become maybe a little organised as a result of the deadlines for writing articles and having to chase people up about interviews! Overall, I think that I have learned and improved on many transferable skills whilst being a journalism leader, and am very grateful to have been given this opportunity

Do you have any tips for next year’s Journalist Leaders?

Sofia – Be fully committed to doing it as you get out of it what you put into it. It’s great if you are passionate about a subject as you have the opportunity to write about it.

Congratulations to Isabel, Li An, Sofia, Amber, Raima and Madeleine for reporting on such a wide variety of topics on life at NHEHS in such style – from interviews with top poets and Olympians to study tips to debates on the benefits of sport to the House Shout – they covered it all!

If you would like to read our Year 10 Journalist Leaders’ articles, please see the links below:

Three Things About NHEHS that the Prospectus Can’t Tell You

Year 7 Sum NHEHS Up in 3 Words

The Whole of NHEHS Blings Their Bins

Why Should You Care About Sports?

Waterpolo at NHEHS: Interview with U15 National Waterpolo Finalist Mia

What is a Team Sport & Why Should You Play One?

Why I Love Science

An Ode to Everyday Science at NHEHS

Did You Know NHEHS has an Olympian on its Staff?

Did You Know We Had a Dressage Champion at NHEHS?

What Could You Do With a Tenner? (Tenner Challenge)

From the Parthenon to Po Mo – Da Vinci Programme

A Big Thanks to Mr Shoults for Coming to the Rescue on D of E!