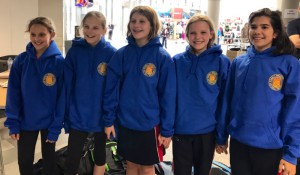 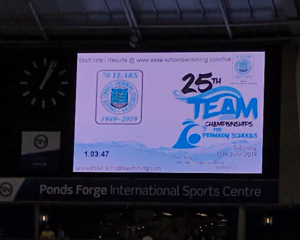 On Saturday June 15th, the NHEHS Year 6 swimming team travelled to the 25th ESSA team championships for primary schools at Ponds Forge in Sheffield.  The train was quite busy on the way up, but the journey went like clockwork and we were even able to sneak in a cheeky Starbucks on the way! We arrived at 1 pm then picked up the team hoodies at the signing in desk and proceeded to the poolside by the marshalling area.

The girls had a last minute bite to eat before the parade of captains and officials, with Alex and Evie representing our teams as the captains marching behind the London banner. Then they lined up for the National Anthem ahead of the badge presentation for the participating teams from all over England by the president of the ESSA, Simon Bedford.

The NHEHS team put on a tremendous performance in the races, beating the original qualifying times by 5 seconds in their events and qualifying for both medley and freestyle B finals on the day. 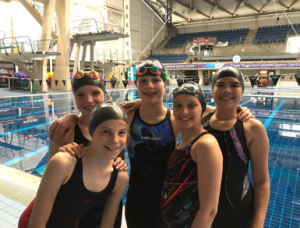 There were three heats in each event in the eight lane pool, so with 24 teams for each event, the team came a fantastic second in the medley relay B finals (10th fastest 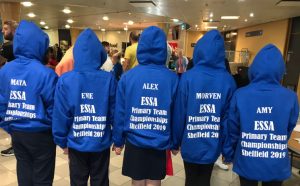 We travelled back high as kites after such a brilliant day, returning to Ealing by 20.30 pm. I suspect they all had a great night’s sleep after all the excitement!